Lead Belly and his contribution to folk music

Huddie William Ledbetter (January 20, 1889 -December 6, 1949), more commonly known as “Lead Belly” in the music industry, was a folk and blues singer from Louisiana. Lead Belly first started to learn music at the tender age of two years old. Legend has it that he mastered any instrument he attempted to learn. Some of the instruments he first mastered include the piano, the mandolin and the accordion.

Huddie Ledbetter quit school before even attending high school, but by the age of 14, he was a well-known musician and singer. He later became known as the king of the twelve-string guitar and Stella (as he affectionately called his guitar) became his “ticket to life and his freedom”. It was evident that Lead Belly was passionate about his music. It was a means of enjoyment and self-expression.

In the year 1918, Lead Belly killed a man in Dallas, and as a result was sentenced to thirty years in state prison in Huntsville, Texas. In 1925, he wrote a song asking to be pardoned by Governor Pat Neff. Although Neff promised at his election that he would never pardon a prisoner, he broke his promise and set Lead Belly free. After being released, Ledbetter hit the road again with numerous new songs that he had learned or written at Huntsville. Again, he found enthusiastic supporters and audiences throughout the south. 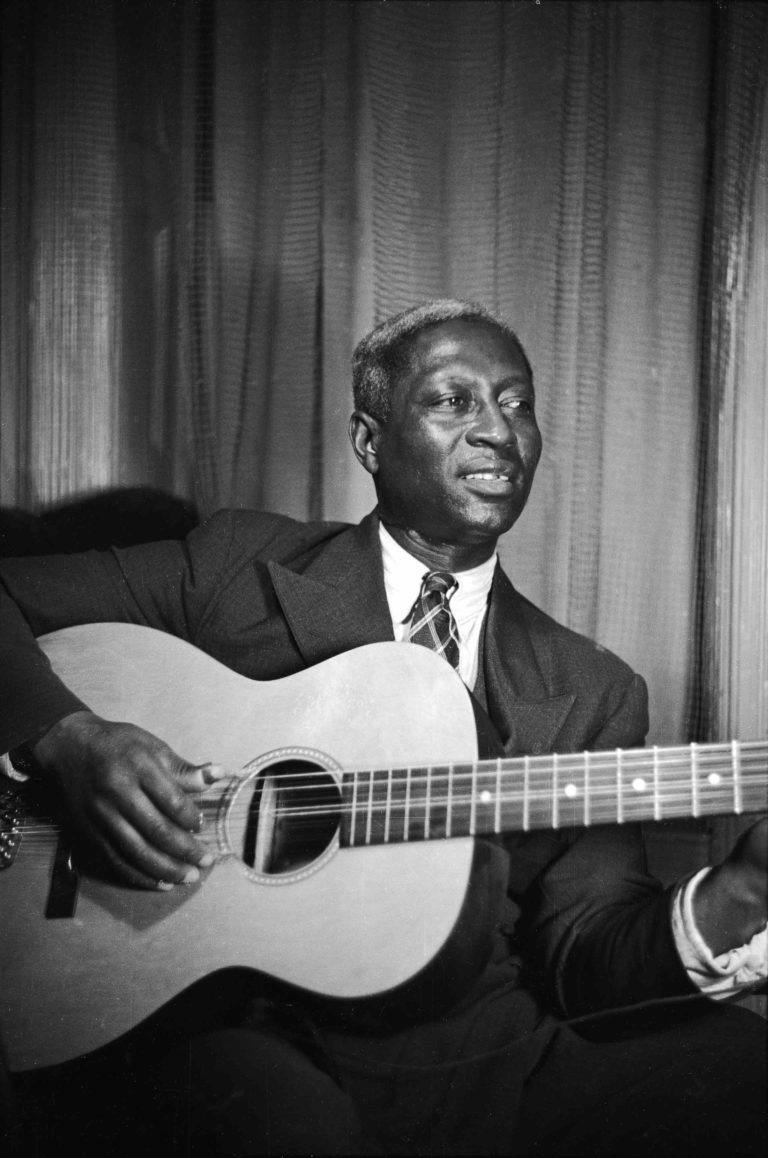 Later in life, Lead Belly was discovered by folklorists John and Alan Lomax, who were recording songs for the Library of Congress. They carried Ledbetter to New York, where he played on various college campuses such NYU, Harvard and Priceton just to name a few.  Shortly after, Lead Belly relocated to New York, where he made personal appearances, recorded for many music labels and worked with the radio. In the early 1940s Huddie performed with a plethora of artists such as Josh White, Sonny Terry, Brownie McGhee and Woody Guthrie. In 1948 Lead Belly recorded his “Last Sessions”, a fundamental document of “The Life and Music of the King of the Twelve-String Guitar”.

After Lead Belly’s death, a folk quartet called the Weavers, carried his song “Good Night, Irene” to the #1 position on the charts. Lead Belly’s song became the most famous song in his repertoire. It sold a million copies and was also recorded by another artist named Pete Seeger. Lead Belly’s music still has an impressive influence on some of the most famous artists in the genre of music. Artists like The Beetles, The Rolling Stones, Little Richard and Eric Clapton have all communicated that they have studied music from Lead Belly’s records.

A Deeper Understanding of Folk Music

Folk music is considered to be a genre of music with many unknown composers, which is passed onto generations primarily by oral tradition. In Africa, music and dancing is associated with not only celebratory events but also everyday life in general. Although thrown into unfortunate and uncomfortable experiences, there is no doubt in my mind that, there were numerous African elements that carried over into African American folk music during slavery.

The banjar is an instrument that arrived along with slave ships in the 1800s that came from West Africa. The banjar (now known as the banjo) along with other instruments such as the djembe boarded the ship with the slaves who were forced to play them and dance.

When drums were banned from the slaves’ use (because it seemed like they were enjoying it too much), the slaves substituted. Patting Juba is a style of music and general enjoyment that serves as a style of rhythm and accompaniment to dancing. Patting juba (which is specific to the United States) consists of a combination of foot stomping, hand clapping and so much more.

Work song is another style, branched from folk music that stemmed from African culture. According to African American Music by Burnim, M. and Maultsby, P. (pp. 77-79), “In Africa, singing frequently accompanied group work wherever it took place, in the fields or on the water.” These work songs were sung while conducting tasks, whether it be planting, picking cotton, harvesting, etc