The Legacy of
Elizabeth Cotten

Folk music, like folk literature, is of oral tradition. Folk music is learned through listening rather than reading. The question of whether a song/piece of music is folk music depends on a certain criteria based on patterns of transmission, social function, origins, and performance. The infamous folk artist Elizabeth “Libba” Cotton only needed to hear a tune a couple of times to learn it. She is also a self-taught left-handed, upside-down, banjo and guitar player which made her so profound in the genre.

Born Elizabeth Nevills, circa 1892 near Chapel Hill, North Carolina, Nevills began singing and playing the banjo at a young age. Like most things in the world, the banjo is created with the intent to be played by a right-handed person. Although she was left-handed, she didn’t make this repress her interest in learning to play the right-handed instrument. Due to the lack of left-handed banjo players, Nevills taught herself to play the instrument. To make life easier she played the bango upside-down with her left hand as it was more comforting to her.

At age nine, Nevills was forced to drop out of school and get a job. By age twelve, she was able to purchase her first guitar. Within a matter of time she was able to master the craft the same way she did with the banjo. About a year later she was baptized in a Baptist church, and was being convinced that the music she sang and played was the ‘devil’s’ music and she needed to quit. By age fifteen, Elizabeth Nevills had formally become Mrs Elizabeth Cotten after marrying her husband Frank. By sixteen she was a mother and wife, so busy that she had to set aside her love for music. 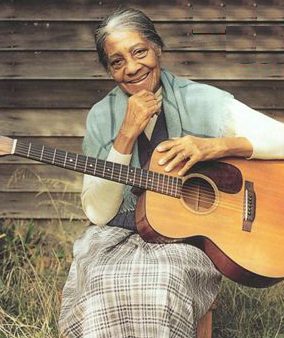 After relocating to Washington, D.C., in the 1940s, she was reintroduced to her love for music  through a family whose kids she cared for. More specifically, the musical Seeger family, Ruth Crawford-Seeger and the legendary ethnomusicologist Charles Seeger. Many years later their son, Mike Seeger began recording Cotten, and by 1958, at age 62, she released her first album, “Elizabeth Cotten: Folk Songs and Instrumentals with Guitar.” From then her career continued to span well into her 80s.

Due to her left-handedness she played the banjo upside down, which meant the strings were turned upside-down as she held it in her left arm. Therefore, she played the bass with her fingers and the tremble with her thumb. Due to this, she adopted a unique picking style when playing the guitar. Her signature method of alternating bass is now widely known “Cotten style” or “Cotten Picking.”

Learning about  Elizabeth Cotten better known as “Libba”  was so breathtaking. She gave me such inspiration through learning her story. No matter the adversity, she never gave up. She turned a right-handed instruments into left-handed ones and played better than right-handers. After she thought of herself as retired, she was able to make a comeback in a career she thought had ended a long time ago. Her impact in not only Folk arena but in all aspects of music will forever be valued and remembered.