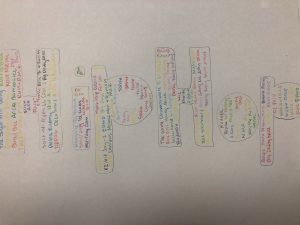 In this photo, the names of various hip-hop artists are presented. These are artists from several different decades and each of them represent a certain style and era of the genre. From Grandmaster Flash to 2 Pac, each of these artists have or have had their personal contribution to the genre. Hip-hop encompasses many different characteristics such as DJ-ing and MC-ing (rapping).

Hip-hop is influenced by virtually every other African American genre before it. Some songs sample music from the disco and early R&B eras. Many MC’s within various hip-hop groups perform over pre-recorded loops called “tracks” or “beats”. During the 1970s, hip-hop DJs were very popular in the genre. This decade served as the foundation for the other expressions of hip-hop that emerged in the 1980s. The development of hip-hop in all aspects (spoken word, dance, music and graphic art) is credited to three main DJs named Kool DJ Herc, Afrika Bambaataa, and Grandmaster Flash. In addition, there are a multitude of rappers and hip-hop groups who are constantly adding to the hip-hop civilization through different rap style and different tracks and beats. These artists include but are not limited to Kendrick Lamar, Drake, and Donald Glover. Often times, hip-hop is described as a civilization, constantly keeping people connected through an expressive and informative art form. I believe that hip-hop has always been more than just a musical genre and has constantly been evolving with African Americans and will continue to do so forever. 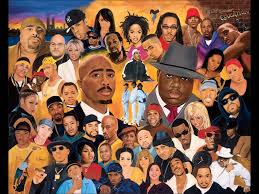