The most popular form of group singing since the start of the Twentieth Century is secular and religious quartet singing. Black quartet arrangements continue to hold major influence and significance on the evolution of modern day music. The jubilee style of music originated in the choirs of southern Black institutions and colleges and as a further result, the first forms of Black quartets came to light.

The word “jubilee”, according to William Tallmadge can emphasize themes of freedom in a spiritual sense, point out themes of joy within spirituals, and refer to what spirituals are as a whole. The Black Sanctified Church has also greatly influenced jubilee-gospel quartets. Depending on the regional places of origin, Black quartet traditions may vary and appear different in comparison to one another.

Groups such as The Gospel Jubilators have been participation in the jubilee quartet tradition for about 40 years. Although jubilee singing has had a fluctuation in popularity throughout the years, The Gospel Jubilators brought life back into the singing style in the 1970’s. Their goal is to incorporate elaborate harmonies that bring spirituality to the forefront. 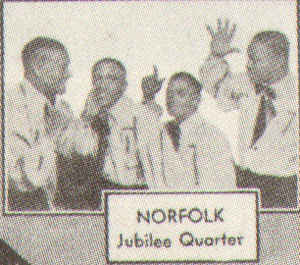