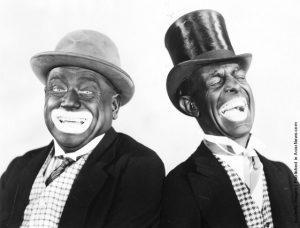 How did the minstrel develop? Describe its form, major characters, and musical content.

White minstrel teams in the 1840s mirrored the habits and customs of southern slaves or urban blacks.  A minstrel show was and became a full- length entertainment segment, featuring performers in blackface that performed songs, dances, and comic skits based on stereotypes of African American life and customs. These show had an opening act full of parodies, a middle section with instrumental solos, ensembles, and dances and an ending skit section on a southern plantation. These performers were skilled in playing the fiddle, banjo, or another kind of African-inspired instrument. The “walk-around” was known as the grand dance conclusion.

When and why did African Americans become minstrels?

In what seminal ways did African American and white minstrel performances differ?

While they both shared a musical collection, African Americans incorporated plantation songs, dances, and original composed melodies. Not only that, but by the late nineteenth century, African American minstrels were rejecting the use of burnt cork and creating a stage message with meaning instead of with jokes.