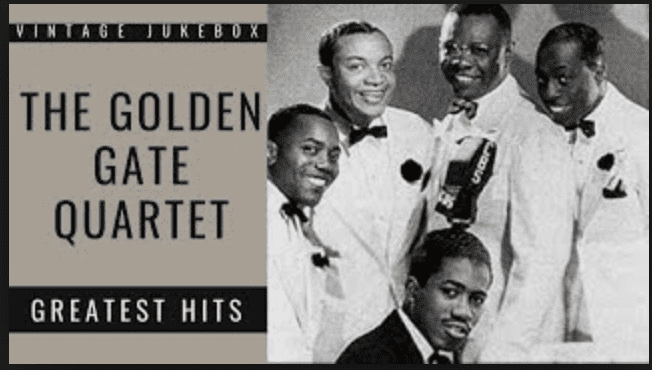 Where Did They Start?

Originated in the Norfolk suburb of Berkeley, VA this close-harmony black spiritual, jazz undertone, rhymic verve quartet was formed. Staring off their performances in the local high schools and barber shops in Norfolk, VA the group eventually evolved into performing at the Carnegie Hall. Their biggest starter accomplishment was being able to perform for Eleanor Roosevelt making multiple appearances at the White House. As time went on they recruited more members including Clyde Riddick, Clyde Wright, (Baritone)J. Caleb Ginyard, and (Pianist)Emel Burgess.

Strophic: Song form in which a single melody is repeated with a different set of lyrics for each stanza.

Blue Notes: A note, sounded or suggested, that falls between two adjacent notes in the standard Western division of octave, most often the third or seventh degrees in a scale.

Grace Note: A short ornamental note performed as  an embellishment before the principal pitch.

During the 1950s the group went through several changes. The group went on a tour of Europe in 1955. The members of the group have primarily lived and worked in Europe since the mid-to-late 1950s. Riddick and Wilson anchor the top and bottom of the trademark Golden Gate Quartet sound, with second tenor Clyde Wright, who has been a member of the band, on and off, since 1954, and baritone Paul Brembly, became a member of the group in 1971. The group remained active well into the 1990s.