The Five Blind Boys Of Mississippi 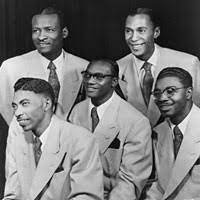 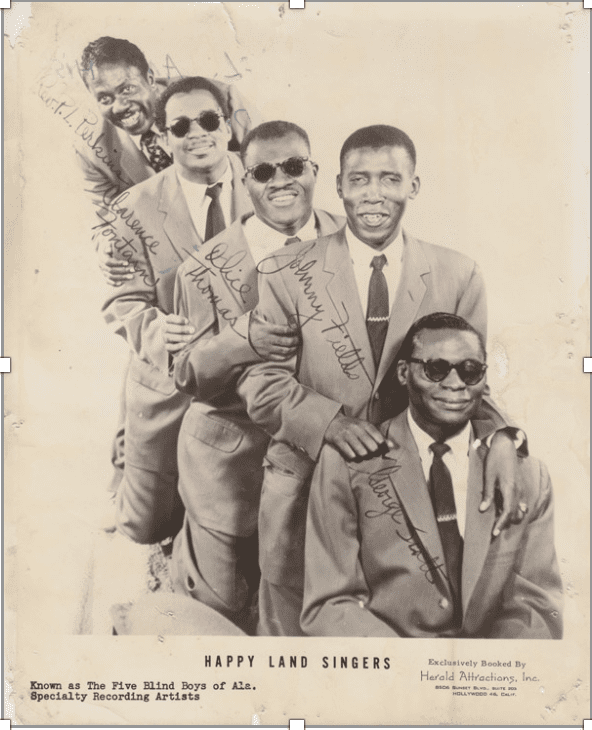 The decade my partner and I chose was the 60’s. We were given the task to find two gospel artists from this time. She found the great Mahalia Jackson. The song that she chose was God Knows The Reason Why. When it comes to me I chose The Five Blind Boys Of Mississippi. The song that I chose was The Song Of Praise. Both of these artists are amazing, I just found The Five Blind Boys Of Mississippi. Honestly, people should feel drawn to them. When it comes to their discography people can see they have Precious Memories, I’ll Go, The Original Five Bling Boys, There’s A God Somewhere, and so much more. There are so many different songs/albums that could have been mentioned. The Five Blind Boys of Mississippi were inspirational due to their longevity in the music industry, the way they added popularity to gospel music, and the impact they had on the black and disabled community.

The Five Blind Boys of Mississippi were around for a while. When research is done people will find that they were active for a very long time when they began in the 30’s as students. This group got a lot of its style from Robert H. Harris because people considered his songs very soulful and that this time his style was unique. Rober H. Harris was the lead singer of the Soul Stirrers. Back to this group, the original members were Lawrence Abrams, Archie Brownlee, Joseph Ford, and Lloyd Woodard. The group originally started with 4 members. They were originally known as the Jaskson Harmoneers. They became a quintet  in 1942 when Melvin Henderson joined the group. They became known as the Five Blind Boys Of Mississippi in the mid- 1940’s. That’s interesting because this was after they had moved to Chi-town.

It took them a while but this group did have a lot of popularity. I was gained between the 1940’s and 50’s. They also had songs hit the billboard. When doing reasearch people will learn that The Five Blind Boys Of Mississippi rendition of Our Father made charts. Get this: It was one of the first gospel songs to hit the charts. The Five Blind boys also had a lot of different people sing with them through out their career. Some of them being Rev. Sammy Lewis, James Watts, Tiny Powwel, etc. This group did go on tours, one of the tours that stand out is in the 90’s. This is said because at this point a couple of members had died and had been replaced. Brownlee died in the 60’s and Lawrence Abrams passed away in the 80’s.

The Five Blind Boys impact was bigger than other’s could have imagined. They were a group who faced a lot of intersectionalism but still chose to prevail. The men were black and blind and in this time and even now. Those two traits are looked down at. We all know that America doesn’t care for the ”Blacks” and especially people who are disbabled. They’d prefer to have the “normal”. Even though those that were considered “normal” stole from many singer’s and groups. Including this one. The Five Black Boy were a part of the black history movement because not only did they make it easier for black singers to be successful but also black gosepl singers. In this post the hope was that the reader gained a lot of knowledge of this group and learn to appreciate The Five Blind Boys of Mississippi even more. 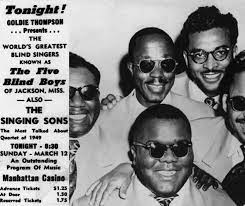 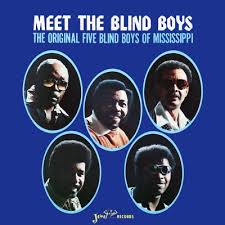