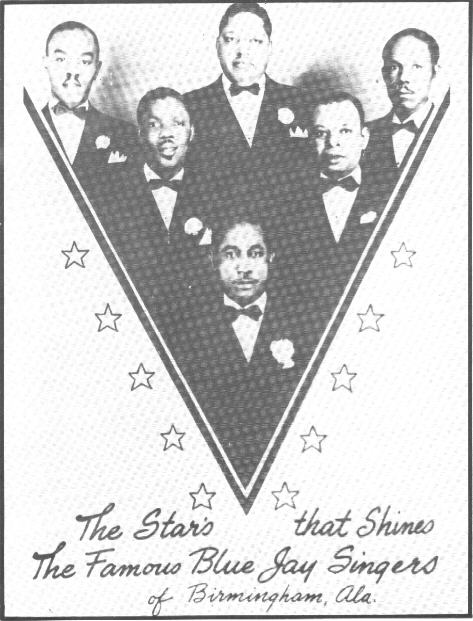 The Famous Blue Jay Singers only recorded ten titles for Paramount in 1932, but it was those titles that became highly popular and were re-released on the Crown, Decca, Champion, Varsity, and Joe Davis labels after the demise of Paramount in 1934. The group was located in Jefferson County, which had earned the reputation of being America’s capital of gospel quartet singing. Birmingham did not have a permanent recording facility, however at least ten resident black a cappella gospel quartets made commercial phonograph records prior to 1940, The Famous Blue Jays of Birmingham being one of those groups who left an international influence.

Record: Blue Bonnet 159
Title: Something Sweet About the Lord

Title: Shall I Meet You Over Yonder

The Famous Blue Jay Singers were able to leave an impact with the work of ten recorded titles. Their work was appreciated as many labels did not hesitate to re-release the music after the end of Paramount. Although the group split from its original, all members continued to spread their talent as four paired up with another talent and one joined another group as well.  All blessed their talent to listeners through gospel music and left an impact on the local quartet scene. Although it is hard to find information online, it is very clear they lived a full life of notable music.