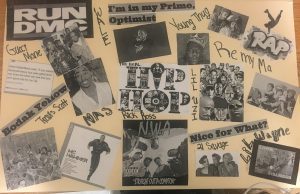 Hip-Hop began in the Bronx, New York and later spread to Harlem in the early 1970’s. The creative expression encompasses turntables, mixing musical instruments, toasts, and verbal stylized sounds over “beats” or “tracks.” Hip hop draws from multiple cultures across the African Diaspora including the Caribbean culture, specifically Jamaica. Break dancing was the first form of expression in response to hip hop music. Continuing through the 1980’s and 1990’s Hip hop continued to be a voice for the inequality occurring within the African American Community. Groups such as N.W.A. took to rap to express their own feelings towards these social injustices. Moving into the 2000’s gangsta and street rap became prominent in areas such as Atlanta, giving way to the term “The Dirty South.” Artists such as T.I. and Gucci Mane arose from these times. Today hip hop has helped unite the divide seen between multiple races and ethnicity. While many believe that hip-hop has lost its original attitude, as today it encompasses  explicit and very exploitative lyrics, its culture has only continued to increase in mainstream society. My poster vividly expresses the lyrics and artists that have greatly influenced hip hop since its beginnings in the 1970’s to present day.