Funk, Disco, R&B, Techno and Soul….What a time to be Black! 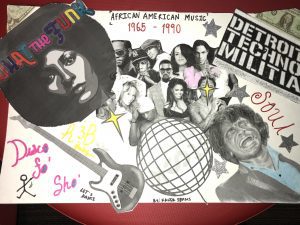 Picture above is a collage I created to portray where we were in African American Music from the 60’s to the 80’s. The image I created includes the genres Funk, Soul, R&B, Disco, and Techno. The 60s 70s and 80s were some of the best times for Black music. The music was unique, fun, and impressively challenging.

Funk, which was popular in the 1970’s and 1980’s was rhythm-driven, and “groovy”. Funk refers to a style of urban dance music that has a hard syncopated bass line and drumbeats that are accompanied by a number of instruments at once, aiding in the creation of a “groove”. Funk was different than the Blues because the emphasis was one the “one” where as in Blues the emphasis tended to be on the “four”. This made the listener feel like they were on top of the beat. It was exciting and energized.

Soul and R&B Music  are closely related. Soul is said to be the result of the urbanization and commercialization of Rhythm and Blues. Soul varied regionally at times.  In urban centers like New York, Philadelphia, and Chicago, the music concentrated on vocal interplay and smooth productions. In Detroit, Motown concentrated on creating a pop-oriented sound that was informed equally by gospel, R&B, and rock & roll. Soul began to cross into pop charts. This is the point were the genre R&B was created. R&B was a way for Blacks to take back the genre that was one called race records. This genre encompassed styles and esthetics commonly found in soul and funk music. The genre is a way for Blacks to come together and sing about the things that connect them. Often times the theme of R&B music is love

The genre of disco music was developed in nightclubs in the 1970’s. Disco music is comprised of consistent beats that put listeners in a trance. This music was meant to provoke dancing. Out of this genre of music came well-known dances like  the Hustle and the Bump. In addition to a time signature of 4/4 and a fast tempo, disco music was characterized by the so-called “four on the floor” rhythm style. The music was even and not very rhythmically colorful. This characteristic made it great music the club scene

Techno originated in Detroit, Michigan in the early 1980’s. It did not become popular worldwide however until the 1990’s. This genre is unique in the sense that it is strictly electronic though it sounds similar to early forms of disco music.  DJs—Kevin Saunderson, Juan Atkins, and Derrick May are a few musician who pioneered  this genre of music. This genre is now extremely popular in places in Europe and in places in Japan