The Captivation with Syncopation: An Introduction to Ragtime 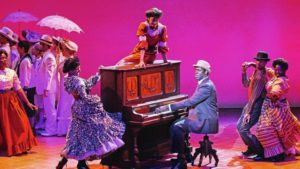 “Ragging” was first established with an adornment of rhythmic patterns, originating in cities of the midwest. It first emerged near the end of the 19th century and further gained popularity up until 1920. The genre materialized from the folk blues and marches. Many of the first ragtime artists were illiterate, so the music was not first transcribed. Ragtime encapsulated many underlying styles, ranging from classic ragtime to the racism-influenced coon songs. Ragtime was a secular genre that contrasted with jubilee quartets in its primarily instrumental foundation.

Any song that was attributed to “ragging” the melody was denoted as encompassing the ragtime genre. The genre encapsulates all musical styles from cakewalks and “coon songs” to traditional instrumental and vocal rags. Despite the early negative connotations, ragtime’s most prominent element was the first use of syncopation. This rhythmic pattern is a staple of the genre. With syncopation, ragtime artists integrated poly rhythmic arrangements in a way that had been described as being an”off-beat” syncopated march. That is, accents were placed into the rhythmic flow in previously unusual locations. The rags also incorporated AABBACCDD sections that were repeated throughout the melody.

Ragtime could be described as having a particular “swing” vibe, which encouraged lively dance. A major instrument in ragtime music was the piano, played in an accentuated 2/4 beat. The triplet time often heard in most rag instrumentation stemmed from a banjo imitation. The beats originate from those played on drums in Africa. The music was not transcribed until white people heard the songs and placed the melodies on sheet music. Often times, the printed scores reduced the quality and flexibility of the otherwise improvisational rags.

Ragtime was an important genre for the inclusion of all African-Americans. It showed freedom in collectivism. It gave positive energy to the plight of black people in the United States. However, as previously mentioned ragtime was also used by white individuals to perpetuate black stereotypes and racism with the infamous coon songs. The cakewalks and coon songs featured denigrating and typical lyrics sung in negro dialects by whites in black face. At times, black artists were coerced into participating in these minstrel shows. Nonetheless, ragtime became increasingly popular in black social settings. Rags were performed in melanin-population nightclubs and on the radio, with its increased accessibility.

Although artists did receive some compensation for their work, the use of printed scores from white individuals saw a primarily Caucasian commodification of ragtime artistry. After Scott Joplin published “Maple Leaf Rag”, an influx of rags entered the market and Tin Pan Alley. This million-copy hit was the first rag to get published. However, this feat did not have the power to reduce the considerable amount of money that white people made off the black ragtime artists and piano sales.

Important artists in the era of Ragtime include:

Ragtime lasted about 30 years. Along with jubilee quartets, ragtime gave essential foundations for the creation of jazz, blue, rock and roll, and r&b. In particular, ragtime was so influential in the popularization of jazz that the genres were often synonymous in the public arena. Ragtime is noted as the creator of jazz in 1920. Jazz is simply a version of ragtime with a slower tempo and the addition of horn instrumentation.  The syncopation first used in ragtime serves as the foundation of all following black music with the similar “off-beat” arrangements.

Ragtime, although short-lived, provided a wealth of attributes to African-American music. Its unique elements were fused into the repertoire of many European and American performances. Even though some deemed ragtime a fad, its syncopated trends are alive and well in contemporary black music. The self-taught ragtime artists founded “misplaced” beats that would set the tone for the American music arena. The robust spirit of ragtime cannot be lost in history as it would indicate an erasure of a vital piece of African-American history.