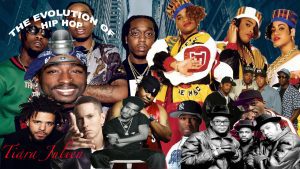 Hip-hop started in some of New York’s poorest cities. Since then it has become a well recognized genre that dominates the radio and has expanded the music industry. It generates hundreds of millions of dollars a year and has changed music culture in not only in America but, around the globe. While many associate Hip Hop with soly rap, Hip Hop is more than the music, the movement, and the feel. It is a civilization that continues to grow and expand over time. Hip hop includes rapping, DJ and tables, break dancing, graffiti art, beatboxing, and more.

The Get Down! The underground movement known as Hip Hop began in the 1970’s, in my birthplace and where I was raised, the Bronx, New York. At the time New York City was home to violence,crime, and economic struggles. With the fall of the city, came the rise of Hip Hop at street parties, block parties, and functions. Hip Hop incorporated r&b, disco, rap, dj’s, and scratching. Although it was popular in the Black community, it did not become mainsteam until 1979. This marked the end of old school Hip Hop with artists like Kool Dj Herc and the Zulu nation, and the start of the Golden Age as it became commercialized. The Golden Age ! As rap entered the mainsteam, recordings of mixes became popular. The music of Hip Hop became more technical and included Looops, samplers, and remixes. Rappers began adding their vices over mixes. This era iss where many popular hip hop songs use their samples from. During this era the live performance style began to diminish as DJ’s were no longer the front of  Hip Hop. Hip Hop had begun getting its proper recognition and earning awards. This recognition forced major record labels to realize the ecoomic gain of Hip Hop. In 1885 hip hop artists were no longer exclusie to black labels. Everyone wanted a piece of hip hop. Artists of the era of Hip Hop include Run DMC and LL Cool J. Rppers were now the main acts of Hip Hop. The sound of Hip Hop also changed. It became more “hard” and “street” to attest to the real life hardships of Blacks. This was the start of the aggressive rap behavior. From the mid 80’s to the mid 1990’s classic hardcore rap was coined. The music not only talked about violence but male dominance sexually

Hip hop also varied depending on the respective regions. On the West Coast, Hip Hop was heavily influenced by gangs and vioence. This was the start of “gangster rap” with the likes of NWA, Eazy E, 2pac, Snoop Dogg, etc. On the East Coast, Hip Hop and Rap was more of a competition. Emcees battled daily to prove they belonged in the rap game and work their way up the chain to stay prominent and relevant. There were also beefs and violence but they were more “lyrical” opposed to the West Coast’s “smoke and chill” rap. When it comes to the “Dirty South,” rap was more distinct to cities than as a whole. Houston had the Geto Boys with Scarface, Buhwick Bill and Willie D. Atlanta had Outkast, Memphis had Three 6 Mafia, New Orleans had “Bounce” and DC had GoGo music. The South is where “Trap Music” started because of the rough and dangerous lifestyles associated with the south.

Hip hop has immense diversity, innovation, influence, and great quality. Hip Hop became an art form where experimentation of vocalizing controversial issues was futile. As rap become more mainstream, bringing about the rap music of today also know as Pop and R&B Rap. Hip Hop continues to evolve alongside the development of social media and the Internet. The influence that rap has will only strengthen.