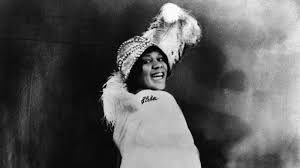 The Blues by: Makayla Leonard

Blues is a mere of music that was made in the 1870s.  It was inspired by negro spirituals and mostly highlighed the pain and suffering that blacks had to go through. However, some musicians of the blues genre did not express their misery. Originating in the deep south, specifically Mississippi, Blues was sang primarily by African American women. It gave them the opportunity to express themselves, their thoughts and feelings about their lives. The first Blues superstar, Bessie Smith, brought the rest of the country’s attention to the Blues being heard in clubs all throughout the Mississippi Delta region. Bessie Smith got her stardom in the 1920s and 30s and became known as the Empress of Blues music. Songs would often be heard with a singer talking about their relationships and how they felt and what they might do about it. Bessie Smith’s music was no different. She had hundreds of thousands of copies sold, her best selling song called Down Hearted Blues, is what put her on the map. The song is closely related to her past and present life, while also foreshadowing the events for her life to soon come.

The Blues is a music genre that originated in the Deep South amongst African-Americans. The genre emerged during the 19th century. Many elements unique to blues such as call and response can be traced back to Africa. The first appearance of blues dates back to the ending of slavery.

The Blues is a music genre characterized by its music lyrics. It is a unique music genre in that it incorporates work songs, spirituals, shouts, chants, and field hollers into one. Many early African American singers of the blues often voice their personal woes, oppression from white people, and/or love lost in the songs they sang.

Blues had a huge impact on race relations in America. In the 1960s, British musicians like the Rolling Stones brought a newfound appreciation for blues music to America. The music of artists like Little Richard and Chubby Checker bought people of all races together to enjoy blues music.

It wasn’t until European bands began acknowledging the importance of blues music that it gained popularity. White run record labels took a huge interest in blues music because of this popularity. These companies could pay a reasonable price to record a few songs then sell songs without paying the artist royalties.

Jazz as we know it would not exist without blues. The blues also had an impact on gospel music. Some gospel songs were written with blue notes.

Blues is a complex music genre. It incorporates different rhythms, instruments, and patterns into one. One of the things I admire the most about blues is its origins. I think that the fact that blues was commodified in the way it was is devastating because it took another race of people in order for the world to see how wonderful blues was.