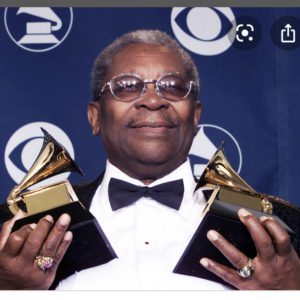 Riley B. King ( aka B.B. King) was on September 16, 1925 in Berclair, Mississippi to the parents of Albert and Nora Ella King. After a few years, Ella King left her husband for another men leaving Riley King to his grandmother where he would join the gospel choir at Elkhorn Baptist Church and begin to play the guitar. In 1943, he traveled with the Famous St. John’s Gospel Singers of Inverness, Mississippi as a guitar player playing for multiple churches and WGRM in Greenwood, Mississippi. In 1948, King performed for the first time Sonny Boy Williamson’s radio where he began to get audience coverage. Due to that airtime he began to do some engagements here and there finally working at WDIA as a disc player and singer where he was given the nickname “Blues Boy” (B.B. King). 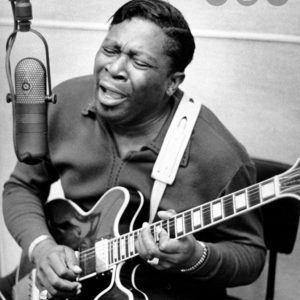 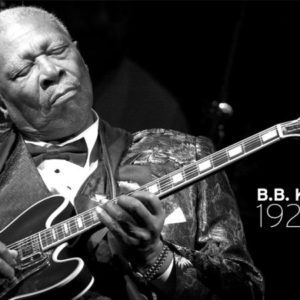 B.B King is not only a musical legend, an activist, the man known for being the Blues King but an inspiration to all. He was born on a cotton plantation in 1925 and at the end of his life had become a Blues Legend. He is also an American singer-songwriter, guitarist, and record producer.He used his voice and guitar to describe his life as a sharecroppers’ son including hardships and triumphs to a renowned musician. His music was so brilliant that it crossed racial and cultural divides that many African Americans were being faced with at the time. His success led him to acquire many awards such as the Presidential Medal placed on him by George W. Bush. King not only made songs that related to our struggle but also intwined instruments to make uniques beats that were unheard of. He is known as the King of the Blues because he changed the sound, beat and detail of the “common” Blues genre. He introduced a sophisticated style of bending, vibrating and shimmering his electric guitar. At the age of 89 the well known Blues Legend succumbed to congestive heart failure and died in his sleep on May 14, 2016. Although, he died B.B. King left behind something that still touches people all around the world to this day. His music is not just lyrics but a story- his story and his people’s stories of what they faced and how they dealt with it. He is a hero, leader and activist to all us and will forever be known as the king of Blues.

TAKE A LISTEN:
1st Video: Live At The Royal Albert Hall in 2011
2nd Video: One of his top songs, Sweet Little Angel
3rd Video: B.B. King referred to this performance as his last one