Soul was the first actual integrated genre where  Black artists were appreciated, respected, and adorned alongside white artists. When Blacks participated in the Ragtime genre and sang Ragtime music, they were typically portrayed as subservient or absurd racially stereotypical characters. Black ragtime artists, when performing along white artists, would have to put on black face, and oftentimes, their white counterparts would also put on black face. During the Blues era, Black artists were frequently disenfranchised by white people. Not only did Black artists typically not perform with white “Blues” artists, but white producers and music managers like the Lomax’s took advantage and commodified struggling “Blues” artists. Jazz started as a predominantly Black genre but, like blues, was also infiltrated by white artists and “remade” with less flavor. Soul was the first genre that intended White and Black people to work together and have equal opportunity for fame and success. This happened at Stax Records. 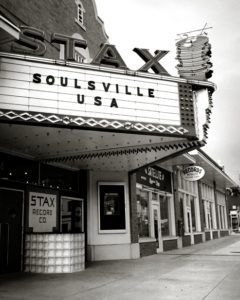 Stax Records was initially founded in Memphis, Tennessee, in 1957 by Jim Stewart under the name of “Satellite Records” (the name was changed in 1961). Stax was one of the most popular soul music record labels of all time and part of their success can be owed to the fact that they were one of the few integrated record labels. Black artists would come together wtih white musicians to compose and create the music that topped charts in the 60s-70s. The Stax house band was integrated, which means that the majority of the music produced at Stax Records had Black and white artist collaboration, which was very progressive for its time.

One of the popular interracial groups that came out of Stax Records was Booker T and the MGs. They recorded one of Stax’s first mega hits “Green Onions” in 1962- this tune is still recognizable and famous today. The group included Booker T. Jones (keyboard), Steve Cropper (guitar), Donald “Duck” Dunn (bass). The song “Green Onions” charted at #33 on the pop album charts the month of its release.

Some other famous Stax Records artists are Otis Redding, Sam and Dave, the Dramatics, Johnnie Taylor. It was important that a label with as much influence as Stax was openly integrated and celebrated diversity in its artists but also its administration. Because they were so successful, it made a statement about Black and White collaborative art. Stax produced records that we still know and love today and I believe that’s something to be celebrated.