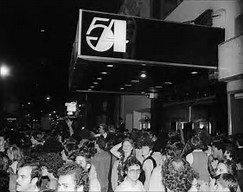 “Studio 54” was first opened in 1927 and was named the “Gallo Opera House”, after its owner Fortune Gallo. The Gallo had many failed attempts to draw an audience, and was lost to foreclosure after only two years. It later reopened under new ownership as The New Yorker, but continued failing to attract sufficient crowds. The club switchen ownership again in the early 1930’s and in 1937 it became the WPA Federal Music Project of New York City’s Federal Music Theatre/Theatre of Music. In 1939, it changed its name to the “New York Theatre.” The New Yorker Theatre saw its final production, Medicine Show, end in May 1940, following which the building remained vacant for three years. CBS Studios bought the property in 1943, renaming it “Studio 52” CBS named its studios in order of purchase; the number 52 was not related to which the street on which it was located.

CBS used the theater for radio broadcasts. From the 1940s to the mid 1970s, CBS used the location as a radio and TV stage that housed such shows as What’s My Line?, and many other shows, as well as the soap opera “Love of Life” which was produced there until 1975. In 1976, CBS moved to the Ed Sullivan Theater and CBS then sold Studio 52. CBS put the property on market; many influential artists and fashion designers expressed interest in turning the property into a night club. In 1977, the theatre was renovated into a nighclub offically and finally named “Studio 54.” The owners were Steve Rubell and Ian Schrager, with Jack Dushey as a financial backer. They operated the company as Broadway Catering Corp. It took only six weeks to transform the theater into a nightclub and cost $400,000 before its grand opening on April 26th. Within a month of opening, the New York PD raided the nightclub for selling liquor without a permit, the following night the club reopened selling just fruit juice and soda. Prior to the raid, the nightclub had been using daily “caterers’ permits”, which enabled the nightclub to serve alcohol but were intended for weddings or political events. The state denied the use of the permit, but the permits were only used while awaiting the confirmation of the license.

The frequent guest were A list celebrates such as Michael Jackson, Calvin Klein, Rick James, Diana Ross, Al Pacino, Cher and many more. In December 1978, Rubell was quoted in the New York newspapers as saying that Studio 54 had made $7 million in its first year and that “only the Mafia made more money”. This got the attention of the IRS. Shortly thereafter the nightclub was raided and Rubell and Schrager were arrested for skimming $2.5 million. Studio 54 officially closed with a final party in February 1980, where Diana Ross did a special performance. In 1981, Rubell and Schrager sold the building but opted to keep a lease. Later that year, the building was sold to Mark Fleischman with Rubell and Schrager staying on as consultants for six months afterward. On September 21, 1981 Studio 54 reopened; From 1981 to April 1986, Studio 54 was under the ownership of Mark Fleischman. Then from 1988 until early 1993 Studio 54’s name was changed to The Ritz (previously located on 11th Street and Third Avenue from 1980 to 1987). The club then became strictly a concert venue. CAT Entertainment completed a renovation of the nightclub earlier abandoned because of a lack of funds, and resurrected both the nightclub and the Studio 54 trademark, which had never been properly registered by any of the prior owners or operators.] The remodeled nightclub was operated as “Cabaret Royale at Studio 54” by CAT Entertainment until early 1995.

In late 1995,, CAT Entertainment lost its lease on the nightclub and ceased operations.  Allied Partners bought the building for $5.5 million. The nightclub reopened with a live concert by disco stars Gloria Gaynor, along with Sister Sledge. The building again went into bankruptcy in 1996 and Allied announced plans to demolish it and replace it with Cyberdrome, (a virtual reality gaming venue) unfortuately the project was never completed. The building, which is still frequently referred to as the ‘Studio 54”, houses a variety of tenants, among them a theater venue, offices, and an educational facility called Mandl School, the College of Allied Health. This building also houses Olivtree Securities LLC. Studio 54 was very influential for not just New York social scene, but played a vital role within the disco music realm. Additionally, multiple works of art, entertainment, and media refer to or are associated with the nightclub. Examples include:
54, a movie about the disco, was released in 1998.
Casablanca Records released a compilation album of disco music, A Night at Studio 54, in 1979.