Aaliyah Dana Houghton was born on January 16, 1979 in Brooklyn, New York to Michael and Diane Houghton. She was enrolled in music lessons at a young age by Diane Houghton, who was a musician as well. Aaliyah is said to have had a spectacular vocal talent even at that young age, and began performing at church, events and weddings. At the age of five, Aaliyah and her family moved to Detroit, where Aaliyah began studying at a catholic school and received a role in the famed musical “Annie”. This is said to have sparked her interest in being an entertainer.

Aaliyah’s uncle, Barry Hankerson, was an entertainment lawyer and had been married to Gladys Knight, and American singer and songwriter. This connection introduced Aaliyah to the music industry on a new level, and she traveled with Knight as well as worked with an agent in New York to audition for roles in commercials and TV programs. Her stage name became solely Aaliyah, and she began to audition for record labels as well as appearing in concert with Gladys Knight. 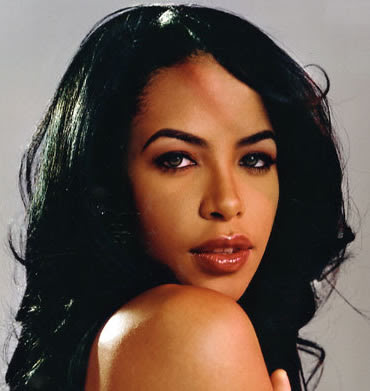 Aaliyah’s debut album ‘Age Ain’t Nothing But a Number’, released when she was 15, sold    74,000 copies in the first week. It hit the 18th position in the Billboard 200 chart, and eventually sold over 3 million copies in the United States, as well as 50,000 in Canada. Her second album, One in a Million, was produced in 1996 and went multiplatinum. Many big names were involved in producing this album, including Jermaine Dupri and mentor Timbaland. Following the success of One in a Million, Aaliyah began touring the world, visiting major cities such as Paris and Tokyo where she was received with enthusiasm. Her 1998 single, Are You That Somebody and had abundant success as a part of the Dr. Doolittle soundtrack.

As well as her music, Aaliyah played multiple roles in television programs as well. Her roles include TV show “Star Search” in 1989 as herself,  TV series “All That” and “New York Undercover” in 1995 and 1997 respectively as herself, feature film “Romeo Must Die’ in 2000 as Trish O’Day, and in Queen of the Damned, a feature film released posthumously in 2002, she played the role of Queen Akasha. Aaliyah also won Best Female Video and Best Video From a Film for Try Again, a part of the “Romeo Must Die” soundtrack, at the MTV Video Music Awards in 2000.

Aaliyah’s last studio album Aaliyah was released July 2001, and debuted at number 2 on the US charts, selling more than 2.4 million albums worldwide. The album featured hit singles  “More Than A Woman,” “Rock The Boat” and “We Need a Resolution”, and went two times platinum.

On Saturday August 25, 2001, Aaliyah and eight of her crew members including her stylist and bodyguard boarded a twin-engine Cessna 402B in Abaco Islands, Bahamas to fly to Florida. The group ended up overloading the plane and exceeding the weight limit with gear and an extra person. Shortly after takeoff, the plane crashed and exploded, killing everyone on board. Aaliyah’s funeral was held on August 31, 2001, with 800 mourners attending the procession, and stars such as Missy Elliott, Sean ‘Diddy’ Combs, and Gladys Knight attending the private ceremony.

Posthumously, the video for Rock The Boat, which she had been filming in the Bahamas prior to her death, was released in October of 2001. Aaliyah won two posthumous awards at the American Music Awards of 2002: Favorite Female R&B Artist as well as Favorite R&B/Soul Album for Aaliyah. In addition, she was nominated and won Top R&B/ Hip Hop Artist (Female) at the Billboard Awards in 2003

Her film Queen of the Damned in which she played the role of Queen Akasha, was released in 2002 to an overwhelming response. It peaked at number 1 in the box office, grossing over 15 million dollars in the opening weekend. Her posthumous compilation albums “I Care 4 U” and “Ultimate Aaliyah” were released in 2002 and 2005.

Age Ain’t Nothing But a Number

One in a Million 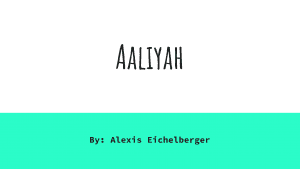 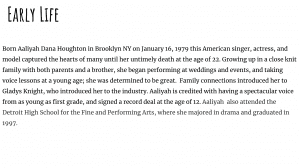 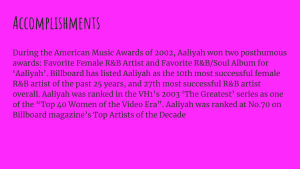 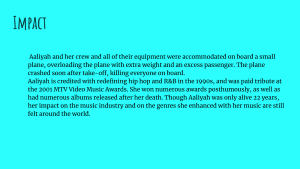 “Who Is Aaliyah? Everything You Need to Know.” Childhood, Life Achievements & Timeline, www.thefamouspeople.com/profiles/aaliyah-558.php.