Spirituals are often mistaken for hymns, but they are actually performance styles that are associated with hymns and psalms. This performance style of song was introduced to African enslaved people by way of Christianity by European missionaries. Spirituals were the earliest form of religious music to develop amongst African Americans. It is a unique expression of religious values and ideals, based on their social, cultural and physical experiences, “of prolonged involuntary servitude”.

Examples of Negro spirituals include“ Free at Last,” “Wade in the Water,” and “Roll Jordan Roll”

In today’s day and age negro spirituals are considered gospel songs. They are often testimonies of ex-enslaved African people to document the pain but also the faith they had. Some of these are commonly heard at events that bring us back to the history of our ancestors. 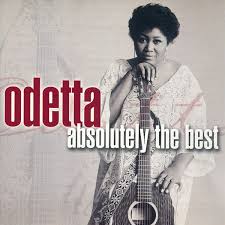 An Example of a negro spiritual singer was Odetta. She often said the songs she sings, “- were liberation songs. You’re walking down life’s road, society’s foot is on your throat, every which way you turn you can’t get from under that foot. And you reach a fork in the road and you can either lie down and die or insist upon your life”  as she reflects on her times of singing  spirituals.(New York Times, Dec 3, 2008) .

Odetta Singing – “Oh, freedom, Come and go with us; Im on my way”

Isis and I have determined that Negros spirituals provided a way of releasing emotions that were often kept inside in order to survive. They presented a  way of expressing African-American’s gratitude to God as well as keeping faith through their endeavors.

In the movie 12 Year a Slave, there is a clip with all the slaves singing ” Roll Jordan Roll”. In this clip you see the emotion from singing these songs, as the main character was hesitant at first and then felt the power within the song.