The concert began with the choir walking into Sister’s Chapel singing while the organist played. To my surprise the concert wasn’t filled with the Glee singing traditionally “black” Christmas carols instead, they sang more classical Christmas themed songs. The songs discussed the story of Jesus instead of Santa Claus which I enjoyed. The first soloist voice was very soothing although she did seem a little tense. Being that she is performing in front of a large group of people I am going to assume that she was nervous. Throughout that performance Dr. Johnson was conductor and used his arms as a way to direct the notes that needed to be sung.

The section that was only Spelman’s Glee club was my favorite part. The women began dancing while they sang “Glory to God in the highest.” However, the part in which the song was disrupted by the gong wasn’t the most pleasant. I was confused as to what the purpose of that was. I enjoyed the part which included Glee dancing while drums were being played. I additionally enjoyed the young woman rapping; it added a nice touch to the performance.

The song “Jesus what a wonderful child” was a nice way of explaining the story of Jesus. Overall, I would say that the concert surpassed my expectations. Coming into it, I had assumed that the concert would be soulful and would have the crowd on their feet however, this was more of a classical concert. The concert allowed for the audience to connect to each song. The concert focused more on the biblical idea of Christmas rather than the commercialized version. 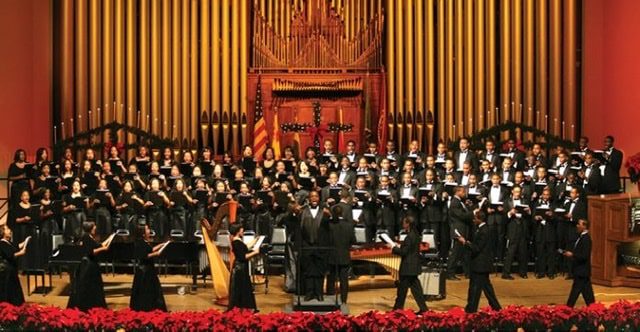