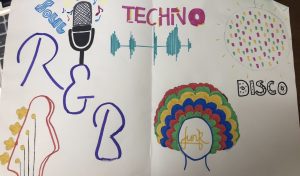 Soul, techno, funk, disco, and R&B are five versatile African American music genres that are share very similar characteristics. They are categorized by their vocals and instrumentations found in within the genres. Some of these genres are mainly influenced by James Brown; the godfather of soul. James Brown was famous for his soulful voice and prideful lyrics in his music. He is also known for singing disco, funk, and R&B and remains the influence for many R&B and hip-hop artists today.

Funk emerged in the late 60s and quickly became one of the most popular genres in the 1970s. It was eventually known as “happy music” or “party music” as it contained uplifting and optimistic lyrics. It was first created by jazz and R&B musicians and incorporates blues-styled horn arrangements, jazz-styled solos, and soulful vocal arrangements. Some prominent artists within the funk genre are Earth Wind and Fire, Cameo, and the Ohio Players.

R&B (Rhythm and Blues) is a musical genre that contains a diversity of styles that tend to be region-specific within the United States. These regions included Detroit, New York City, Chicago, and more. The creation of the blues genre in the Mississippi Delta influenced the blues sounds within the R&B genre and much of the vocal sounds were influenced by southern gospel music. Some prominent artists of the genre include Teddy Pendergrass, Luther Vandross, and Al Green.

Soul is a gospel-influenced genre that became popularized in the late 1950s and the influence for future genres such as R&B and disco. The soulful sound within the genre comes from the use of the rhythms and vocal styles of African American gospel music. Much of the lyrics in soul music talks about romance and relationships and these lyrics eventually expanded into a more sociopolitical commentary as the genre entered into the Civil Rights era. My favorite soul artists are Aretha Franklin, and James Brown.

Disco music emerged in the early 1970s and incorporated funk styles within the music. The characteristics of the genre include prominent bass lines, horns, electric guitar, and more. In addition, many orchestral instruments like piccolos and flutes were used in solos in disco as well. Disco is also associated with specific dance styles including the bump and hustle. Disco artists include Kool and the Gang, KC and the Sunshine Band, and Donna Summer.

Techno music is widely known are dance music or party music. It emerged in the early 1980s in Detroit and uses computer-based digital instruments and software such as Ableton and Logic. Techno music is not widely associated with African Americans, however, several African Americans are credited with the creation of the genre. Much of the techno styles are influenced by funk sounds and samples music from all genres.