Significance of Negro Spirituals in the Black Church

Negro Spirituals are central to understanding the African American experience during enslavement. Spirituals are classified as religious folksongs that came to be in the late 18th century. Examples of Negro Spirituals most of us are familiar with include ‘Wade in the Water,’ and ‘Swing low, sweet chariot.’ Music exemplified one of the few ways our enslaved ancestors were able to engage in creative expression and cultural uplift.

The connection between Negro Spirituals and the Black church has origins within the informal gatherings of slaves filled with singing, chanting, and dancing as an outward display of the faith many held onto. The call and response form typically used in spirituals established a dialogue between chorus leader and the singers, mirroring the relationship we see today between choir directors and the remainder of the members. Negro Spirituals are still sung throughout African American churches across the United States as a way to show reverence for those who only had music to express their faith and hope for a better life.

For many years Negro spirituals were used as a second language. They used these religious songs as a form of communication with each other without actually having to speak because they didn’t want to be heard by the slave master or their family so instead they would sing specific songs, and each of these songs had a meaning. When Africanized Christianity started spreading in the slave population they used these spirituals as a way to express the community’s faith, sorrows, and hopes. Because of Africanized Christianity when slavery was abolished these negro spirituals songs that were used as a form to worship Jesus for the enslaved eventually evolved into what we know now as Gospel music that most black churches use to worship God. Negro Spirituals are the base of the black church because that’s our history and quite frankly that’s how the black Church was started. Where Slaves came together as a community to worship God by singing songs to express their hope, pain, and sorrow in hopes for better days. 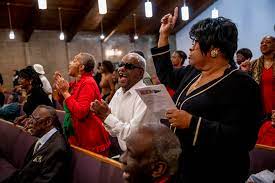