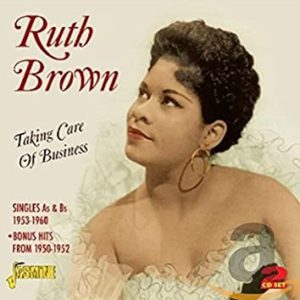 Ruth Brown was a famed Blues singer and songwriter with an incomparable career that played an instrumental role in shaping the Blues genre. She was rightfully crowned the “Queen of R&B” and “Miss Rhythm” due to her role in establishing Atlantic Records as an industry giant. Born Ruth Alston Weston in Portsmouth, VA, she was raised in church where her father was the choir director. In church, Ruth discovered singing as her true passion.  However, she was discouraged by her father to sing music. Wanting to follow her passion, Ruth left home at 17 after eloping with Jimmy Brown, a locally known trumpeter. In the beginning of her career, Ruth was the lead singer in Lucky Millinder’s orchestra.  During her time in this ensemble, Ruth recorded majority of her noteworthy songs such as Mama He Treats Your Daughter Mean and Oh What a Dream. Ruth’s career did take a hiatus during the 1960s but reignited in the 1970s. In the 70s, she began to venture into Broadway. Her biggest musical being Black & Blue. Ruth passed on in 2006 at the age of 78, leaving behind a great legacy that opened doors for all R&B artists who have followed her.

Her Raise to Fame!

At the beginning of her career, Ruth Brown traveled with Lucky Millinder’s orchestra throughout the Tidewater area of Virginia.  After traveling throughout this area, Ruth gained the opportunity to be a full-time singer at Crystal Caverns in Washington, DC. Her popularity grew exponentially and caught the attention of many. Her popularity particularly caught the attention of Atlantic Records, scoring her a record deal and a debut concert at Apollo Theater.  Unfortunately, later that year, Ruth was in a traumatic car accident which left her hospitalized for a year. To make matters worst, during her hospitalization, she and her husband Jimmy Brown divorced. Nonetheless these obstacles did not stop Ruth from continuing her dream. In 1949, Ruth recorded “So Long”, which went to #4 on the Billboard Chart. Then, a year later, she recorded  “Teardrops from My Eyes”, which went #1 and would come to be known as her signature song. As the 1950s progressed, Ruth Brown continued to rock the charts making her the best selling black singer of that decade.

Although, Ruth Brown had major success in the 1950s, her career began took a drastic turn in the 1960s. As her relationship with Atlantic came to an end, the accumulation of touring fees and recording costs became a major burden. Ultimately, Ruth set aside her music career to make ends meet. Yet, in 1976 her musical career was reignited again but this time on Broadway. Ruth landed a role in the Selma musical as Mahalia Jackson. From there, she began to regularly appear on television, Broadway, and movies. Her most significant appearances being playing the role of DJ Motormouth Maybelle in Hairspray (1988) and Black and Blue on Broadway.

With her fame as leverage, Ruth fought for her royalties from Atlantic Records and made a lasting deal with the company to pay other musicians wrongfully done by the music company.  Also in 1988, she founded the Rhythm and Blues Foundation, to help preserve the legacy of R&B and support R&B artists.

Ruth Brown was a captivating Blues’ singer /songwriter who dominated the charts in the 1950s.  She defined what it meant to be an R & B artist and helped develop Atlantic Records into an industry giant. While, Ruth did endure some low points in her career with each down fall, she climbed back up to stardom, reinventing herself from Blues singer to Broadway star. Overall, Ruth Brown’s amazing career and story laid the groundwork for the artists’ deals and music industry we have today.

– Grammy for Best Jazz Vocal Preformance for her album, Blues on Broadway, in 1989

–  Tony Award in 1985 for Best Actress in the Broadway muscial, Black & Blue