What is Rock N Roll?

Rock and roll was created in the 1950’s as a derivative of rhythm and blues also known as R&B. By 1954-55, cover records were omnipresent force n pop music. White teenagers were inspired by R&B music but did not support the black artist who create it, as a result of this cover records were made. These white teens used music as a form of rebellion from their parents to create their very own identity. They used music, dance, fashion, and style to communicate these new ideas. African American culture served as a prime source of appropriation during this time. Locations where white teens typically hung out did not play the R&B music they were attracted too, the teens instead went to black neighborhoods to purchase this records because they were not accessible in white neighborhoods.

White establishments realized this decline in costumers and were adjust to the demand of black R&B music. While now selling R&B music in their establishments, white neighborhoods had to obscure the racial origins of R&B and the identity of its performers. In order to appeal to a larger audience, predominantly white, record companies relabeled the music “Rock and Roll”. The term rock and roll was coined by disc jockey Alan Freed on his hit radio program “MoonDog Rock and Roll Party”. As his radio show gained more popularity, he neglected to credit the African American style of music R&B. He was prompted to rename the genre of music he played to “Rock and Roll”. He than began referring to himself as a rock and roll disc jockey. This resulted in music industries re-branding and promoting rhythm and blues and rock and roll for the consumption of white teenagers. 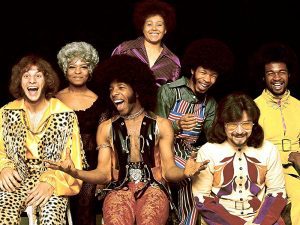 Earth, Wind & Fire (EWF) is an American band that has spanned the musical genres. They were one of the most successful bands of 1970s.

Jimi Hendrix: The Man, The Music, The Experience by: Alexandria Evers

Jimi Hendrix: The Man, The Music, The ExperienceAlexandria Evers Introduction & Thesis Statement During Jimi Hendrix’s lifetime, he was able to take his childhood experiences

By: Ivy Watkins and Tiana Opara