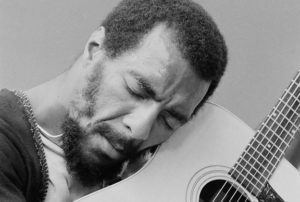 When people look up the definition of Folk music it says music that originates in traditional popular culture or that is written in such a style. Folk music is typically of unknown authorship and is transmitted orally from generation to generation. This definition could not be further from the truth. Folk music originated from Negro spirituals which come from the black culture. Most music comes from black culture. A lot of composers for these Negro Spirituals/ Folk music include Odetta, Lead Betty, and Elizebeth Cotten. I am focusing on Richie Havens because his music was a mix of Folk and soul, he was considered an icon when it came to Folk music, and he was a pioneer when it comes to black music.

Richie Havens was a singer, performer, and an artist (2009). He was born on January 21st, 1941 and he passed away on earth day April 22nd, 2013. Some work in his discography include Nobody Left to Crown, Grace of the Sun, and High Flyin’ Bird: The Verve Forecast Years(2009). All of this work was created in the 2000’s. Some work in the 1900’s would include Mixed Bag, Something Else Again, and Electric Havens. This is not all of this work but this is some of it. Richie Haven’s lyrics are very beautiful(2009). This is said because his lyrics are always telling a story. One of the songs that is my favorite that tells a story is Handsome Johnny.

When it comes to Richie Havens and his career in Folk music he started in the 1960’s. He was playing in Greenwich Village Clubs (2009). He also was the opening act for Woodstock Music & Art Fair in 1969 (2009).  Richie Haven’s first song was Freedom(2009). His first album to hit the billboard charts was Something Else Again. He was iconic when it came to Folk music, and music in general. When doing research I learned that his networth was 85 million dollars. Richie Havens had a very successful music career.

Richie Havens was a joy to research. Personally, I feel that he taught me a lot about folk music, and the story it is meant to tell. His life was one that not only musicians can look up to but everyone that can look up to. I hope that this research teaches people a lot about this genre of music and Richie Havens. Thank you for reading!