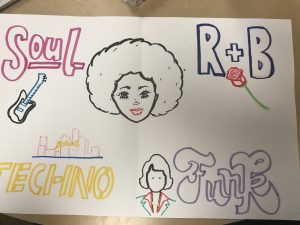 Soul, Techno, Funk, and R&B are four genres of African American music created in the mid twentieth century that had an enormous impact on the music industry, future genres, and people all around the world.

Soul music emerged in the late 1950’s from the African American community, with influences from gospel, R&B, and jazz. This genre was especially influential because of its popularity during the Civil Rights Movement. It is said to be the result of the commercialization of R&B that created Soul music as a new genre all on its own. Characteristics of Soul music include catchy rhythms, body movement, lead vocalists, and chorus. Artists who are credited with having popularized Soul music are the Godfather of Soul himself: James Brown, Ray Charles, and Al Green. Soul Music is credited with having influenced future genres such as Hip Hop, and modern R&B.

Techno music was created as a form of electronic dance music that emerged from Detroit in the mid to late 80’s. Techno is influenced African American genres including soul, jazz and funk. Techno is usually characterized by a repetitive instrumental used by a DJ. From it’s rise as a popular party genre in the United States, techno spread to the rest of the world, becoming popular in party scenes in countries such as Germany. Techno has evolved with the years and is still popular today with influences in the form of EDM or house music, and many pop songs as well. Artists credited with having helped techno evolve into a popular genre include Juan Atkins, known as ‘The Originator’, a popular techno DJ.

Funk music arose in the 1960’s as a mixture of jazz, R&B, and soul, and is described as, in one word, danceable. Funk music is characterized by its rhythmic electric and bass guitar, as well as prominent percussion. Soul and R&B lend their rhythmic concepts to Funk music in the form of polyrhythmic beat foundations, as well as symbolized lyrics and cultural significance. Funk became a popular party music in the late 1960’s with the help of James Browns influence, and Kool and the Gang, with their hits “Funky Stuff” and “Jungle Boogie” in the early 1970’s. This new dance music invited people to get on their feet and ‘give up the funk’.

Rhythm and Blues, or more commonly referred to as R&B, is a genre that emerged from African American communities in the 1940s. The name Rhythm and Blues was originally used by record companies to describe what is characterized by influence of gospel, blues and jazz, and usually includes guitars, a heavy consistent beat, and more emotional lyrics (relationships, sex, economics, etc). R&B entered mainstream music as a genre in the mid 1950s, and radio played a huge role in its exposure as it became increasingly popular across racial borders. Artists who helped to popularize and evolve R&B include Louis Jordan, and Ray Charles. R&B has gained a mountain popularity through the years and is now an established genre of music, with world famous artists such as Usher, Brandy, and Alicia Keys.