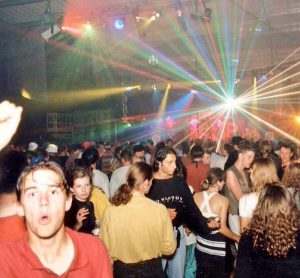 Detroit, Michigan has always been known as a city in which black people were able to successfully thrive and cultivate their creative talents. Because of the new sounds of Detroit Techno music, a new music scene followed. In the late 1980s, the local rave scene began to thrive. These places were typically populated with young, white teenagers from the suburban areas. These teens enjoyed large-scale parties accompanied by electronic music. In 1988, Techno: The New Dance Sound of Detroit was released in the United Kingdoms. Just as the rave scene developed in Detroit, the same spirits permeated the United Kingdom, Manchester, and London.

The rave scene in Detroit encompassed diversity between white teenagers and small percentage of African American, Asian, and Latino teenagers. The white teens who attended these raves were typically know to live outside of the city limits of Detroit, they were college bound and eager to enjoy the parties and electronic music Detroit had to offer. Like most cultural activities Americans partake in, Detroit Techno music and Raves parties that coincided originated through black creativity but was thoroughly enjoyed by white teenagers.