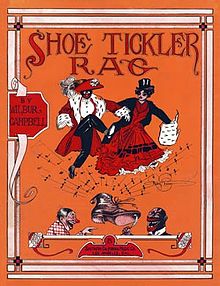 Ragtime is a music genre that dates back from the 1896 all the way until 1920. The defining characteristic of ragtime music is a specific type of syncopation in which melodic accents occur between metrical beats. Ragtime was typically sung in Negro dialect by white people in black face and sometimes by negroes in minstrel shows. Cakewalk is a form of dancing during Ragtime that involved slaves mimicking their slave masters and then slaves were awarded a piece of cake for winning the dance. This genre is so important because ragtime’s composers, practitioners, and admirers see its boundaries different from other genres. Among many ragtime artists was James Hubert Blake. Blake was known as Eubie Blake, was an American pianist of ragtime. He wrote Shuffle Along, which was one of the first Broadway musicals written by African Americans. Scott Joplin was another ragtime American composer and pianist that was well known with this genre era. Joplin was dubbed the King of Ragtime and during his career, he wrote 44 original ragtime pieces, one ragtime ballet, and two operas. His biggest-selling ragtime song in history was “Maple Leaf Rag”.