Ragtime music came into existence way before music had a name.  It is a performance style that accompanies popular song, dance, and instrumental music. It is a musical style that enjoyed its peak popularity between 1896 and 1920.  Ragtime was uniformly defined as having African American musical roots. Historically, ragtime was observed as song, dance, and instrumental music. The cakewalk and coon songs became well known in the public mind. Characteristics of the genr 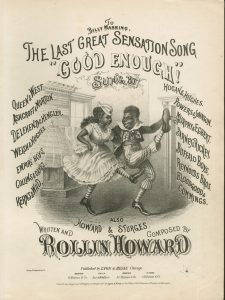 e include a specific type of syncopation in which melodic accents fall between metrical beats. As ragtime music grew to become more popular, it was performed all across North America. Blacks found their first performing opportunities after the Civil War. Important ragtime performers include Scott Joplin and Tom Turpin. Ragtime music was commodified by European composers. They created their own versions and brought African American ragtime as sheet music back to Europe. Some consider ragtime as an influence on classical and jazz music. Ragtime was the first truly American music genre before jazz. In the 1940s many bands began to include ragtime in their repertoire and put out ragtime recordings on 78RPM records.  Overall, ragtime pieces usually contain several distinct themes, four being the most common number.  It was created and popularized by iterant African American musicians, many of whom did not read or write music. Ragtime was first developed as a playing style performed in bars and brothels as contemporary entertainment.