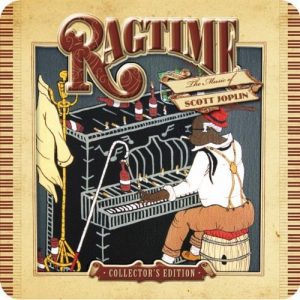 Ragtime music is a music that depends on syncopated music that was played in a fast pace.This began with piano, but also was adapted to other instruments. The genre was created by African Americans who were generally unable to read or write. Its reign lasted from the years 1896-1920. This music was typically performed in bars, saloons, and more where African Americans were able to perform post Civil War. Ragtime lasted for a bit of time but then evolved to jazz music. The father’s of ragtime music can be noted as Scott Joplin. In ragtime music, the right hand is the hand that goes fast, while the left hand maintains a steady beat. This music is very hard to play and usually ends with a dance (cakewalk). It was inspired by the banjo and the fiddle. It was popular from sheet music.

Throughout history it has been proven that the white man has been envious of black creation and talent. In continuous effort to oppress the black man through a mockery called “coon Music,” the white man as always has failed. Although white men have tried to prevent us from prospering, we have continued to fight no matter the hardship. The white man’s hatred is rooted from his desire to see us fail (which we cannot allow ourselves to come to). The black man has rose up and used music as a form of expression. No matter what the black man will always be up. This proves that the white man was in fear, especially because all of their slaves were freed.

The white man continued to use black face in order to make a mockery of Black culture. In black face, the white man would paint his skin black with shoe polish, greasepaint and mock black features. These were based off generalizations of black men and women. He would then act as black man on stage by performing music in a foolish way. These were parodies of black culture and were attempts to dehumanize the light that the music brings and blacks bring to the table.

Although the white man has had many attempts to dehumanize the blacks, our creative souls always pull through. The white man’s only way to come close to the black mans creativity is by mocking it. With mocking it, they are attempting to not seem as stealers, so they refrained from revamping our style (even if they tried it would NEVER be as amazing). It is apparent that the white man is jealous because he must mock us to feel supreme. The white man made money from copying our ideas. Although they feel as if they are supreme, they are not. Without African Americans, life would be dull. Blacks are innovators. The white man is a thief and is quite unoriginal.