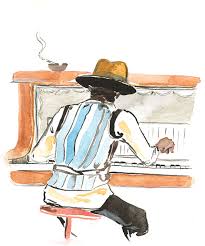 Ragtime is a musical genre created by African Americans introduced in 1896. This colorful and creative genre of music consists of syncopated rhythm, which can be traced back to it’s African roots. Syncopated rhythm consists of unanticipated rests and accents that create an off-beat sound.

Popular instruments used to play this genre included the piano, the banjo, and the guitar. Scott Joplin was a famous pianist and composer who was credited as, ” The King of Ragtime”. He wrote 44 ragtime compositions, a ragtime ballet, as well as a ragtime opera during his musical career.

Although ragtime was a predominantly African American genre, it was often duplicated and mocked by whites. Ragtime was used to make fun of blacks, as whites performed ragtime styled music in blackface and performed cake walks.