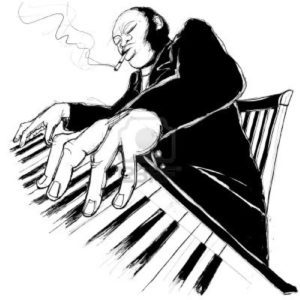 Ragtime, which peaked in popularity between 1896 and 1920, emerged out of the Folk-Blues genre and from the ways enslaved people played fiddles and banjos.  After slavery ended and the Civil War, Black Americans were only allowed to play their music at “venues of low reputation,” such as bars and brothels, which is where Ragtime was first created and recognized.

Ragtime is known for its elaborate syncopation (upbeat), which involves placing the beat in between where it would naturally go.  Black American musicians transferred rhythmic elements of music played on the banjo to the piano, which created ragtime. This genre is also mainly instrumental.

Along with the rise in popularity of ragtime came racism in the performances of the music.  Cakewalks, coon songs, and minstrel shows displayed this racism. Cakewalks were dance competitions between Black people who mimicked the behavior of White upper-class Americans; the winner would receive a cake, hence the name cakewalk.  Coon songs and minstrel shows portrayed negative stereotypical images of Black Americans and were most commonly performed by White people in blackface. Minstrel shows, however, were sometimes performed by Black people under the command of White people.

Ragtime was created by Black Americans, many of whom did not know how to write sheet music, so ragtime was mainly an orally transmitted genre until White people took notice of it and wanted to sell its sheet music.  “Maple Leaf Rag,” composed by Scott Joplin, was the first piece of sheet music to sell 1 million copies. After the publication and popularity of that rag, other musicians and music publishers were inspired to produce sheet music for the ragtime genre. Ragtime heavily influenced the jazz genre.  When rags were slowed down and horns were added to the music, that became the formation of jazz.

I do not like ragtime because I think Black Americans were taken advantage of and made fun of a lot using this genre of music.  In my opinion, cakewalks, coon songs, and minstrel shows took away from the musical abilities of Black people and turned our culture into a joke for the enjoyment of White people.  It is interesting, however, that when White people play ragtime (using sheet music) they lack the soul and improvisation skills to make their replicas sound exactly like rags played by Black musicians.