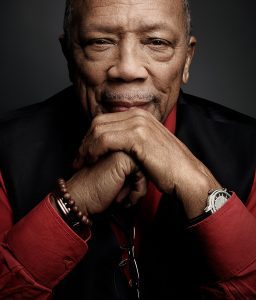 The Quincy Jones documentary opens up with this quote. He starts off by describing some of the struggles he had to endure in his childhood. He was born in 1933 on the South Side of Chicago to a local street gang’s carpenter and a mentally ill woman. He was exposed to gang violence at a young age and told the interviewer that he “wanted to be a gangster until 11”. In addition to being raised in a high crime neighborhood, Jones witnessed the separation of his family. At an early age, he witnessed his mother suffer from a schizophrenic breakdown and ultimately she was admitted to a mental institution. The family then relocated to Washington and this is where Jones’s musical journey started. He tried every instrument but fell in love with the trumpet, but he did not want to just limit himself to  being just a trumpeter. 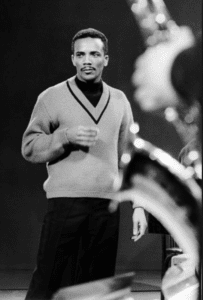 Jones not only played the trumpet but he was also a film composer, producer, director and a mentor. He wrote charts for Tommy Dorsey, Gene Krupa, Sarah Vaughn, Count Basie, Duke Ellington, Dinah Washington and Ray Charles. He conducted and arranged countless pieces for Frank Sinatra. Michael Jackson called Jones his mentor when he produced his two most famous albums, Off the Wall, and Thriller. He has written scores for 33 motion pictures some include In the Heat of the Night, and Walk Don’t Run. Jones wrote the theme music for the TV shows Samson and  Son, and The Bill Cosby Show.  In 1985, he co-produced Steven Spielberg’s adaptation of Alice Walker’s The Color Purple. He was also the music producer for the film, The Wiz. There is no limit to what Jones could do. He crossed over to different genres and was involved in many different areas in the music industry.

Every day, my daddy told me the same thing. 'Once a task is just begun, never leave it till it's done. Be the labour great or small, do it well or not at all.'

From watching this documentary about Jones it is obvious that he truly lived by this quote from his late father. Despite the difficulties he had with his health, Jones still produced high quality work even today. I personally did not know all of the important contributions Jones has made to the industry. Without him figures such as, Michael Jackson, and Frank Sinatra might not have reached audiences like they did with his magical touch. In conclusion, I am grateful to have experience the magical touch Quincy Jones had on the artists and the music industry.