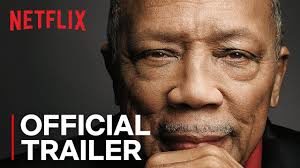 Quincy is a Netflix original film documenting the life of Quincy Jones, focusing on his contributions to the music and film industry, as well as his humanitarianism later in life.

Quincy Jones was born in the 1930’s to a local street gang’s carpenter and a mentally ill woman.  His grandmother, a former slave, raised him and his younger brother and Jones spent most of his childhood afraid that his mother would escape from the mental institution and kill him.  Jones began interested in music at a very young age and he played several instruments during his childhood; he felt like music was the only thing in his life that he could control.

In 1957, Jones moved to Paris to study classical music and embarked on a career that changed the music industry forever.  Jones worked on the soundtrack for The Wiz and with several noteworthy musicians including Michael Jackson on Off the Wall, Thriller, and Bad.  Jones was also the first African American Vice President of a major record label and had several other “firsts” during his career.

Jones currently mentors young musicians and travels the world with them as they perform at various venues.  Jones became a humanitarian later in his career to use his platform to promote change and speak on various problems that were important to him.  Jones said in one of his interviews that he likes hip hop because it reminds him of bebop.

Quincy Jones contributed great music to the world and he will always be knows for his producing skills.  I, however, appreciate his attempt to use his platform for the greater good because he is doing more than making money off of people.  I like that he is also trying to help people.