By: Kori Barnes and Kierston Forney

Groups such as Earth, Wind, & Fire, The Ohio Players, Cameo, and Parliament-Funkadelic used costumes as way to create a sense of identity and a unique group persona. Stage production was an important component of funk because it tied the sounds of funk and stage presence of the performers together. Also, stage production was considered a form of theater. Coordinated costumes and conservative lighting, sound and visual effects gave way to flashy, individualistic costumes. Each group in this time period had their own sense of style and individuality when it came to their stage production.

The Ohio Players wore tuxedos, fur, hats, and other accessories to establish their persona as players. Their live performances included light shows, sound effects, and audio and visual effects.  Earth, Wind, & Fire were known for their futuristic and space age costumes. They dressed in shiny, sequined white/bright colored pants and accessorized with decorative designs and platform shoes. In addition to this, they used looked to science fiction films such as Star Wars and Close Encounters of the Third Kind for inspiration.  For groups such as Parliament-Funkadelic, stage production was taken to another level as the cost of production increased tremendously to complement the concept albums. Stage props for their tours included 12 foot high platform boots, flashing lights, smoke machines, and lasers. 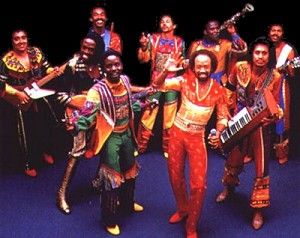