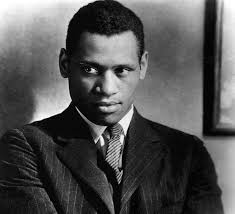 Paul Bustill Robeson was born April 9th, 1898 in Princeton, New Jersey and died January 23rd, 1976 in Philadelphia, Pennsylvania. Paul Robeson was world renown figure not only as a singer/vocalist, but also as an actor, scholar, lawyer, athlete, and political activist. As an African America, Mr. Robeson made an astounding impact on the world despite the hostile obstacles that he faced from his home country. Mr. Robeson was born to parents, William Drew Robeson and Maria Louisa Bustill that escaped slavery and a father that took up the honorable profession for black men at that time of being a minister (Gerlach, 2000). With his upbringing from parents that had experienced slavery first hand, Robeson kept this close to his being wherever he went. He proved to be an excellent student (among other things) graduating from Rutgers University as an All American football player and headed to Columbia University law school. It should be noted that Paul Robeson played a total of 4 college level sports and earning 15 varsity letters and was Phi Beta Kappa while in college and had the opportunity to engage in a professional career in athletics (Biography.com Editors). After graduating from law school, Robeson spent some time practicing, but decided to move to another path of performing arts. In high school he was discovered as a natural talent for singing, later becoming adored for his deep and powerful voice and worked in a few plays and musicals. This talent was put to use again in search for work, Robeson began working in theaters in London in 1922 and in New York by joining the Provincetown Players. Some of the plays and movies that he’s been in are All God’s Chillun Got Wings, The Emperor Jones, Show Boat, and Othello. Othello was his most appraised work giving shows and tours around the world including London (1930) and on Broadway (in 1943) (Britannica). Ol’ Man River became Robeson’s trademark song making him the most popular concert singer of his time. From his undergraduate career at Rutgers, Robeson has always been a scholar and interested in history, sociology, law, policy, and activism. After his time in law school, Paul Robeson began to speak up more on issues that involved politics and comparing the conditions of black people at home and abroad. Also, travelling across the globe extensively, he became very familiar with governments around the world and their leaders as well as social activists. Along with travelling to give concerts internationally, he would also give political speeches that discussed the current government he was staying in, the condition of African Americans, workers rights, and other social issues. Because of his lack of criticism of the Soviet Union and individuals that were allegedly associated with the Communist Party, the United States worked hard to stifle his global success. Despite his unwelcomed efforts from his home country, Paul Robeson was invited to speak and perform in many countries in Europe, Asia, and Africa. He was highly regarded for his analysis on the classes within certain governments as well as his artistic performances. Also being a linguist, Robeson became fluent in 7 languages throughout his travels, even studying renowned at universities abroad. With his success at learning the languages, he incorporated the folk songs of whatever region he travelled to in his performance. This was a successful effort to relate the history and cultures of people around the world and earned him a great deal of admiration. In coalition with his political agenda to spread awareness on workers rights, Robeson used his singing as a tool to only be enjoyed by the working class instead of the upper class by strictly performing for workers unions. He would also give concerts that consisted solely of Negro Spirituals because of his firm belief and connection to the African American experience as being a part of the folk songs of the United States. In addition to bringing international light to the experience of the Negro, Robeson was also very experienced in performing operas too, such as Porgy and Bess by Gershwin. Because Paul Robeson was not against Communism or socialist ideas, but did express his dislike in the American government and condition of African Americans, the United States government worked tirelessly to restrict his continued success and work (Duchen, 2014). Reports were made by political figures such as Nkrumah to reverse a job offering to teach at universities or give speeches, concerts, or attend ceremonies as requested by the US government. Robeson’s passport was also banned in an effort to prevent him from travelling and giving a concert. This passport ban hugely reduced his income to a very small fraction of what he made prior. Because of this difficulty, he was even reported to give concerts by phone calls to other countries. In his book Here I Stand, Robeson addressed the pushback from the US by saying, “For more than 10 years they have persecuted me in every way they could – by slander and mob violence, by denying me the right to practice my profession as an artist, by withholding my right to travel abroad. To these, the real Un-Americans, I merely say: ‘All right – I don’t like you either!”. Lloyd Brown, a writer and fellow colleague of Robeson said “ Paul Robeson was the most persecuted, the most ostracized, the most condemned black man in America, then or ever.” (PBS: American Masters, 2006). During the later years of his life struggling for passport approval, Robeson developed depression and heart disease which lead to his death.

Relatively recently, efforts have been made to recognize the impact and legacy he has left after a period of silence. There are a number of biographies that have been written about Robeson including Paul Robeson: A Biography by Martin Duberman. He has also been inducted into the College Football Hall of Fame as well as other recognition released in a collection of films and documentary titled Paul Robeson: Portraits of the Artist.

“ The artist must elect to fight for freedom or slavery I have made my choice. I had no alternative. The history of the capitalist era is characterized by the degradation of my people: despoiled of their lands, their true culture destroyed… denied equal protection of the law, and deprived their rightful place in the respect of their fellows.”

“Neither the promise of gain or the threat of loss has ever moved me from my firm conviction.”

“As an artist I come to sing, but as a citizen, I will always speak for peace, and no one can silence me in this.”

“The talents of an artist, small or large, are God-given… They are a sacred trust.”

“Artists are the radical voice of civil

Duchen, Jessica. Paul Robeson: The story of how an American icon was driven to death to be told in film. Independent Culture (2014). Retrieved from <https://www.independent.co.uk/arts-entertainment/films/features/paul-robeson-the-story-of-how-an-american-icon-was-driven-to-death-to-be-told-in-film-9874111.html>.

The Many Faces of Paul Robeson. National Archives: Educator Resources. Retrieved from <https://www.archives.gov/education/lessons/robeson>.

Beeching, Barbara. Pau Robeson and the Black Press: The 1950 Passport Controversy. (2002). The University of Chicago Press Journals. Retrieved from <https://www.journals.uchicago.edu/doi/abs/10.2307/1562482?journalCode=jaah>.