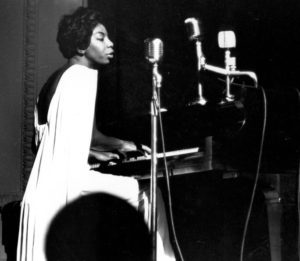 In Chapter 5 of The Songs of Black (Women) Folk: Music, Politics, and Everyday Living, Rasheedah Quiett Jenkins is determined to highlight the connections between several black female artists that have been enlisted in carrying on the tradition of Black women activism. These women all stem from whom Jenkins deems as one of the first to do so, Nina Simone. She insists that those enlisted to “carry the torch” are Lauryn Hill and Tracy Chapman and following them are Jill Scott, India-Arie, and Erykah Badu. Jenkins highlights the importance of carrying on the legacy that the music made by these women holds. She discusses the process by which she chose these women, stating, “I looked across generation and temporal differences to identify the women performers who made significant impacts within the music industry and beyond to the public sphere where their music and messages served as balm and battle cry.” I believe the most important part of her analysis is her use of the phrase’s “balm” and “battle cry”.

A balm is used to heal and soothe. A battle cry stands to encourage others to support a particular cause. These women and their Neo-Soul music are used to soothe and heal as well as encourage the black youth to pass on this message of encouragement and black women activism. I could not agree more with how essential it is for black youth to get continued exposure to songs about black love, black self-love, systemic racism, and social/cultural oppressions that are faced by black people daily. There also needs to be a balance in that call. A balance between the militant calls displayed by Simone and Chapman, as well as the more subdued approach by Hill, which serves as a bridge between Simone and her “daughters”, Jill Scott, Erykah Badu, and India-Arie through placing her focus on inner revolution and re-education.