A jubilee quartet is historically defined as a vocal ensemble that consisted of a minimum of four voices and a maximum of six voices, performing formal arrangements of spirituals and jubilee songs in a four-part harmony.  This was done in an a cappella style with an emphasis on a percussive and rhythmic style of singing.  During the late nineteenth and early twentieth centuries, the jubilee quartet reached a summit of activity when most Black colleges and normal and industrial schools organized musical groups to help support their mission. 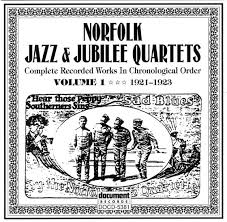 The Norfolk Jubilee Quartet began performing as early as 1919 and was the most influential and best known group of this sort to emerge from the Tidewater region of Virginia.  The group was founded by bass singer Len Williams and baritone Delroy Hollins.  James “Buddy” Butts and Otto Tuston sung tenor.  They were mainly a vaudeville unit during the early ’20s, specializing in blues and jazz, and also singing gospel.  Len Williams shaped their signature-sound, anchoring each song with a scat-like rhythmic pattern, strongly influenced by the jazz music of that day.

The Norfolk Jubilee Quartete was sometimes identified as the Four Alphabets on-stage and during radio broadcasts when performing secular material.  They appeared on the Martin Block program sponsored by Avalon Cigarettes over WGL, WMAC, and WLEW.  The members of the Norfolk Jazz and Jubilee Quartet shifted during the 1930’s, consisting of Len Williams, lead tenor Norman “Crip” Harris, second tenor Raymond Smith, and baritone Melvin Coldten.  Despite being eclipsed by the Golden Gate Quartet, they were still popular, lasting up until the 1940’s, after Len Williams died. 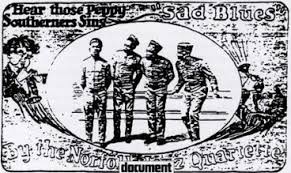