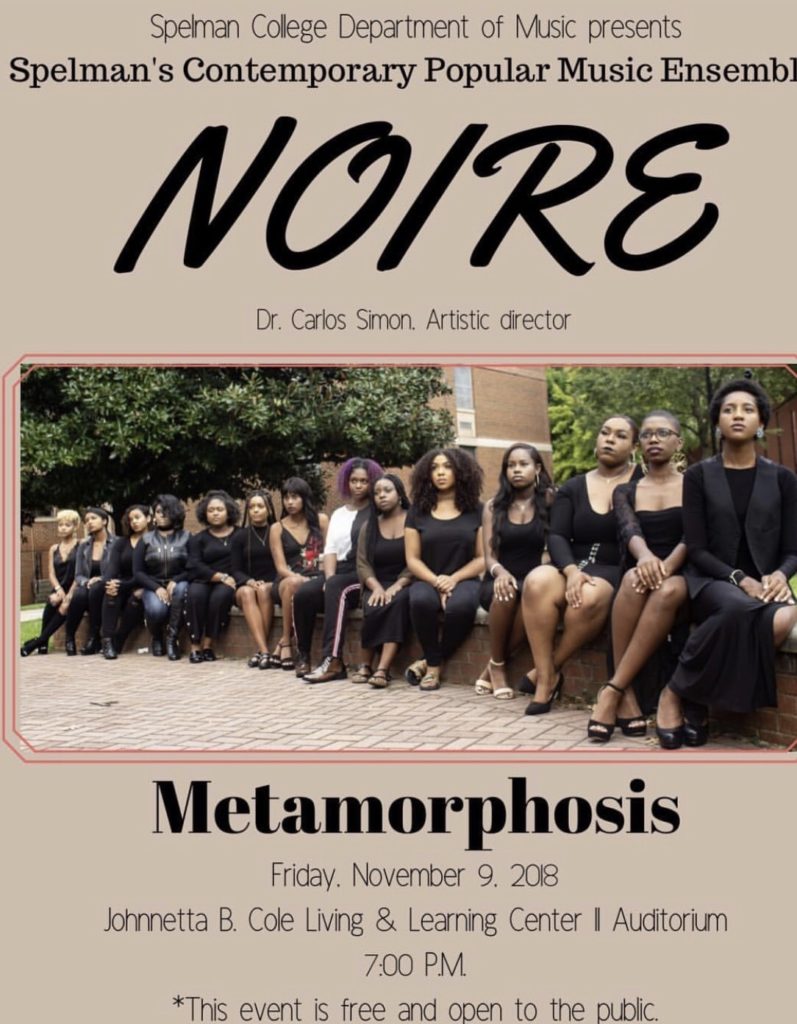 The concert I went to was named Metamorphosis performed by the group Noire. It occurred on Friday, November 9, 2018 at 7:00 PM and lasted an hour. The theme of the concert was centered around black activism. It was directed by Dr. Carlos Simon and there was 7 pieces performed by the choir. Most of the pieces performed had a solo while the chorus sung in the background. The pieces were not originally created instead, they were songs that were already created by a mix of different artists. However, 2 pieces were created by one of the women who sung in the choir. The performers were very energetic and passionate about creating a show for the audience. There was a use of the instrument’s piano and drums. The purpose of this concert was to encourage an atmosphere of activism in the audience based off bringing awareness to the racial inequality that is prevalent in our country today.

In my opinion, the order of the concert flowed nicely. The music was performed well for the most part as the group harmonized very well with one another. There was a mixture of different musical genres that was in the concert. Specifically, I could hear Gospel, some folk music influence, blues, and a little bit of jazz. The choir did a lot of call and response in the performance from the beginning to the end. With majority of the songs, the audience could see the folk music influence by the simple scales and simple melodies that reflected African American folk music in the earlier times. Specifically, with the song performed by Nia Jackson “Somebody Tell me What’s going on”, I seen the influence of blues with the emphasis on the instruments emphasizing the third, fifth, and seventh notes. In addition, many of the solos improvised on their parts which highlighted the element of the blues. A couple of the songs had syncopation that had the audience jumping and moving in their seats as well. Rhythmically, the choir stayed together and on beat with the instruments. However, their dancing was off since some of them couldn’t dance to the beat and didn’t have rhythm. For the most part, they stayed unified and it wasn’t too distracting. I could tell that the director worked hard to make sure that the ladies were in tune with one another and that no one really stuck out. I will say that every voice was distinctive, so they all stood out, but blended so well with one another. In my opinion, the piano brought all the pieces together and really set the mood of the performance. The lyrics to the pieces, the visuals, and the instruments encouraged a mood of vulnerability, sensitivity and motivated the audience to get up and do something about the racial injustices of today. If I could rate the musician’s technical ability, I would give it a 5/5! The instruments didn’t overpower the musicians singing but complimented the songs that were sung. I could tell that the performance was well prepared from the songs that were sung to the poetry that was spoken. I specifically liked two pieces more than the others. They were Nia’s solo “Somebody Tell me What’s Going on?” and the other piece was the song “I am a Woman” written by one of the ladies in the performance. I don’t think I had any compositions that I liked the least because they all evoked different feelings out of me that I feel contributed to the overall atmosphere of the performance. I really liked this concert because the intimacy of the concert was new to me and encouraged me to really pay attention. In other concerts I left feeling pleased and happy with the performance but after this concert I really felt like being active in my community.