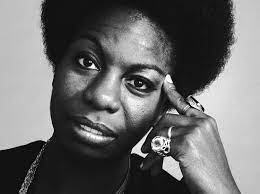 Who is Nina Simone?

Nina Simone was born February 21, 1933 as Eunice Kathleen Waymon. Her stage name was inspired by a boyfriend named Chico who nicknamed her nina, while Simone is derived from French actress Simone Signoret. Her stage name was adopted to avoid detection from friends and family while she performed at an Atlantic City, New Jersey bar. She sang to accompany her piano playing in order to help fund her private piano lessons. As a twelve year old child, Simone showed an activist spirit by refusing to play at her classical concert debut when her parents were removed from the front row in order to make room for white patrons.

Simone’s strong and clear voice as an artist contributed to her emotional urgency and Black female identity in folk music. I will never forget when I first heard her song, ‘Four Women’, on her album entitled ‘Wild is the Wind’. The timelessness of Simone’s artistry was on full display, being that I formally heard the record in 2011 while the album was released in 1966. I was taking jazz and modern dance classes at my local African heritage cultural arts center when my instructor began to freestyle to this song. I was enraptured by the lyrics and her choreography, and I felt entranced by the rawness of Simone’s tone. Black women are not a monolith, and Simone’s music allowed me to embrace being multi-faceted as a Black woman. Although I was not fond of the stereotypical archetypes described in ‘Four Women’, Simone’s matter-of-factness helped me to embrace the context behind these stereotypes and stand firmly in the pride that results from self awareness. Simone’s embrace of authenticity in her music helped me to understand exactly what Folk music entails.

What is Folk Music?

Folk music is an extension of the word folklore, which describes the traditions, customs, and superstitions of the uncultured classes, according to English antiquarian William Thoms. Folk music is often related to national culture, which is why Nina Simone’s music is a major contribution to American folk music. Folk music is characterized as orally transmitted music that is passed down often with unknown composers and played on traditional instruments. Enslaved Africans shared stories and expressed emotions through folk music in the 1600s while using traditional instruments such as the banjo and djembe drums. Simone’s cultural identity is very prominent in her music, and in her autobiography she is quoted as saying: “If I had to be called something, it should have been a folk singer because there was more folk and blues than jazz in my playing…”. In addition, her strong cultural voice contributed to her being known as the voice of the Civil Rights Movement in the mid 1960s. Some of her specific Civil Rights commentary was in songs “Mississippi Goddam”, which was a response to the 1963 assassination of Medgar Evers and the Birmingham church bombing that killed four young African American girls, as well as “Why (The King of Love Is Dead)”, which was created after the assassination of Dr. Martin Luther King, Jr.