The negro spiritual genre began from the early slave songs. As a sacred genre spirituals focused on the relationship between God and the slaves, and their desire to be delivered out of slavery. Negro spirituals typically had a double meaning behind the lyrics as they were also used to conceal messages between the slaves, to be kept away from their overseer. Negro spirituals began in an oral tradition that stayed constant for many years. Negro spirituals often feature call and response, clapping, shouting, humming and guttural sounds. They songs were a aural manifestation of the freedom they so greatly wished to achieve.

Though the songs were originally spread through an oral tradition the first book of negro spirituals was written down and curated by a group of white abolitionists at the beginning of the civil war. These people of course were not the native hearers of this music, so although they notated the music (and took the money from it) it is easy to believe that they were unable to truly capture the original nature of the spirituals. Fast forward to the present, negro spirituals are now performed on a concert stage, with opera divas like Kathleen Battle, and symphony orchestras with composition from Henry T. Burleigh. The copyright money is still going to those white people and their families for music that they did not create. And the true soul of the spirituals has gotten more and more lost. Though we can now, in a way, put our ancestors on the stage with us as we sing these songs, we’ve still lost the true heart of the music. As important as it is that we as black performers sing our own music and pay homage to our ancestors, it is equally as important that we remember the true spirit behind why the sang. They sang for freedom, they sang for hope.  We sing because we have the privilege, they sang because they had too. 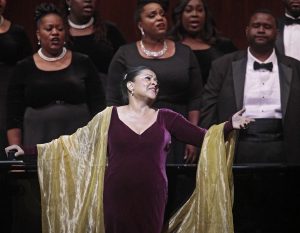 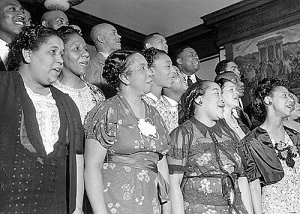