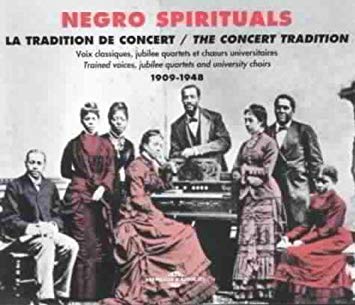 Negro spirituals have played a large role in music since 1865. The narrative of enslaved African Americans is fully captured in the Negro Spirituals they composed, Spirituals that have been preserved throughout time by various arrangers and the infamous yet controversial book, 100 slave songs of the United States.

Negro spirituals became a popular form of song/ storytelling in 1865 with the legal abolishment of Slavery in the United States of America. With that came the documentation by white arrangers in the 1867 publication of the book, 100 slave songs of the United States. This book sparked a lot of controversy due to its lack of known/ named composers and the credit of these Black masterpieces being given to White thieves who just so happened to document it.

That aside, the preservation of Negro Spirituals has a lot to do with the different forms at which the traditional spirituals began to take place. In the 1930s, musicians such as the Golden Gate Jubilee Quartet began performing Negro Spirituals in the form of concert spirituals, spirituals performed in group settings, often accompanied by instruments and or a choir. An example being Kathleen Battle when she performed Lord How Come Me Here as concert spiritual. Other musicians performed the spirituals in a gospel style, one of the most popular spirituals commonly sung in a gospel fashion is “Swing Low, Sweet Chariot”. Artist such as Marian Anderson, Mahalia Jackson, Kathleen Battle and the Golden Gate Jubilee Quartet are a few of the many artists who have kept and continue to keep the legacy of Negro Spirituals alive.

Along with the musicians, one arranger, in particular, played a very important role in creating the sound of Negro Spirituals we know and love today, that composer is Moses Hogan. Hogan arranged over 70 Negro Spirituals including some of the well-known pieces such as Elijah Rock, Sometimes I Feel Like a Motherless Child, Steal Away, Soon Ah Will Be Done, and Wade in the Water, pieces that are still performed today.