Negro Spirituals are the religious and expressive music of African-Americans during slavery; they exemplified Christian religious values and allowed creative expression for the enslaved ancestors and even Black artists and musicians today. Because of its historical longevity, the Negro Spiritual is a testament to the African-American people’s steadfast spirit and perseverance.

It is hard to trace the initial establishment of the Negro Spiritual to the Americas. Still, historians know that it had to have occurred after introducing Christianity to the enslaved populations. The first documentation of African enslaved peoples brought to the North Americas was in 1619, but over 100 years later, the first Europeans attempted to Christianize and force religious assimilation. This period called the Great Awakening was the start of the emergence of Christianity and African-American culture. While it took time for the enslaved African-Americans to latch onto Christianity, eventually, it had a significant presence on fields and plantations across North America. Even those who did not believe in Christianity would sing the Spirituals and encode them with messages about freedom and escape from slaveowners and freedom. 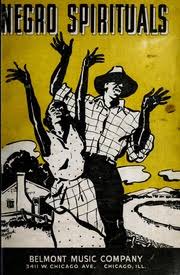 The enslaved were allowed to attend white people’s church if they sat in the back, but many of them would go to the woods and participate in “Invisible Church.” This church service was a discreet and secret praise and worship experience that allowed ecstatic and unbridled worship. These meetings had were kept secret because it was illegal for enslaved peoples to meet without “white” supervision. If caught, they would be beaten or punished in other inhumane and unfathomable ways. The invisible church’s presence started the foundations of the very interactive “Black Church” we know today. The elements of Negro Spirituals introduced in invisible church such as clapping, stomping, call-and-response, and dance and percussion are things that we have carried into 21st-century Black worship experiences.

As the times changed, the Negro Spiritual and its’ performance evolved too. Spirituals were being performed on stages by collegiate groups such as the Fisk Jubilee Singers and notable singers like Marian Anderson and later in history, Jessye Norman. Today, choirs and vocalists around the world still celebrate, appreciate, and perform Negro Spirituals. Recordings are even sampled in some of today’s popular music as they continue to influence generations upon generations of African-American artists.