Negro Spirituals were the religious music of African Americans during slavery. They were based off of Hymns, which are metrical compositions typically comprised of eight bars of rhythmic couplets. These hymns are loosely based on biblical scriptures. Negro spirituals emerged after The Great Awakening which emerged in the 1740s. This was a period of religious revival that swept the thirteen American colonies. Christianity was the religion forced upon slaves by their masters while they were stripped from their ancestral lands, languages, families, and cultures. Although everything was taken from the slaves in order to break them down and force assimilation, the soul of their music could not be stifled. 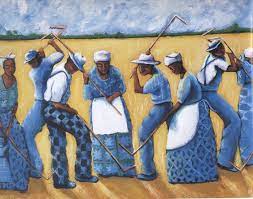 There were several laws created in order to ensure control over slaves, including laws that prohibited their assembly without the supervision of their white masters. Slaves defied these laws with clandestine gatherings in places that were not designated for worship. These places included living quarters and gully fields. Negro Spirituals were used as a way to express their forced faith in their own way, carving out their own identity despite their deplorable circumstances. These songs also served as a way to communicate double entendres. These are song texts with double meaning. Slaves often planned to escape bondage and seek freedom by following The Underground Railroad, and these plans were communicated by the singing and passing along of Negro Spirituals. The legacy of Negro Spirituals still survives today, as one example includes the call and response style that is still prevalent in music and orations in several denominations of the collective Black church.

Because it was illegal for slaves to read and write, Negro Spirituals were passed orally from person to person. This fact makes these songs a type of folk music among African Americans that are unfortunately unable to be numbered due to them not being able to be written down. While many individuals have a preconceived notion of what activism is, Negro Spirituals have been a form of slave resistance and hope that was cultivated by African American slaves and served as precedent for the future Civil Rights movement.