The Pioneer of Storytelling through Music: Negro Spirituals

A negro spiritual is a type of folksong that has a heavy Christian influence.  These spirituals were created by the enslaved Africans when they were brought to the Southern states of America.  The time period which these spirituals were heavily sung was in the last few decades of the 18th century leading to the abolishment of slavery.  Throughout these spirituals, the lyrics were about the hardships of slavery and Christian values.  The origin of negro spirituals arose from the combination of Christain influence, enslavement of African Americans, and African culture.

There are many different characteristics of negro spirituals. One characteristic that many people witness in black churches even today are known as shouts. The clapping, stomping, and shouting that many blacks today witness in praise and worship was also common when the enslaved Africans were singing negro spirituals in church. The white Americans described this behavior and sound as animalistic.  The distinct sound that they are referring to is called timbre.  The  timbre in “work songs” were characterized as having a sad, slow feel where you could hear the pain in their voices. In contrast, jubilees had a more joyful and optimistic feel.

Negro spirituals allowed slaves to express their feelings about what they had to endure during that time period as well as offer hope for a better future. These spirituals were not only used for storytelling but also to convey secret messages between slaves. Popular songs such as “Wade in the Water”, “Swing Low Sweet Chariot” and “Follow the Drinking Gourd” contained lyrics that aided in the escape of many slaves. 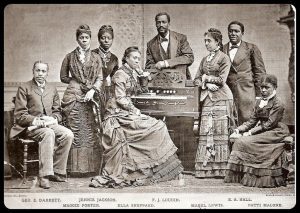 The Fisk Jubilee Singers were organized as a fundraising effort for Fisk University. They performed various negro spirituals across the country to raise awareness of African American spirituals. They were under the direction of John Work Jr., who was the first African American to collect and publish spirituals. 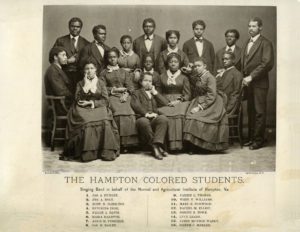 Black artists who sung these negro spirituals had the opportunity to get paid by performing shows. Unfortunately, white Americans took these songs and made a profit off of them as well.  Contrary to popular belief, minstrel shows were common before slavery was abolished. White musicians performed acts or sung negro spirituals in blackface to mock African American culture. White Americans also made profits off hymn books filled with negro spirituals without acknowledging the black artists.

Negro spirituals laid the foundation for a lot of the genres we listen to today. Blues, jazz, hip-hop and gospel music are heavily influenced by these spirituals. For example, contemporary gospel music is very similar to these spirituals by having the timbre previously mentioned as well as the Christian message.

Negro spirituals left a huge impact on black culture in many different ways. This genre of music was the pioneer of using songs to express their feelings and tell stories which many artists currently do now. The styles which we see in today’s music, especially gospel, are heavily influenced by negro spirituals as well. The stories which are told in these spirituals are very important because it allows us to reflect on what our ancestors had to endure that time period.