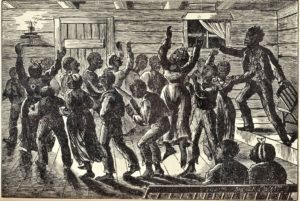 “A Spiritual is a type of religious folksong that is most closely associated with the enslavement of African people in the American South.” (Library of Congress) They are thought to be “original or divinely inspired” saying that “they’d be sung at one point in the day and then that note carried on into the “praise meetings” of the night.” (African American Music) Negro Spirituals were sung and performed by African Americans during slavery for a host of reasons.  They were heavily influenced by western religion of Christianity after the Great Awakening  and were used as cries for help. They focus on the conditions of slavery and the harsh realities they face. In 1940 in an attempt to describe the music “Freedom” said that spirituals were great, melodic representative songs that are products of the turmoil of the negro experience. They were also described not just as mere songs but expressions and explanations. “The slave population was fascinated by Biblical stories containing parallels to their own lives and created spirituals that retold narratives about Biblical figures like Daniel and Moses.” (Library of Congress) These stories provided hope that there would be a better day. Some famous negro spirituals include “Wade in the Water” and “Swing Low Sweet Chariot”‘. Spirituals were either sung in “call and response” or they were seen as “protests songs” that went against their current conditions. (Library of Congress) It is also speculated that some of the songs such as “I Got My Ticket” include “code pertaining to the Underground Railroad.”  The codes even hinted at freedom even as overtly as singing “Run Mary Run…You Got The Right To The Tree of Life.” This shows that Negro Spirituals held many purposes and functions aside from the fact that music, dancing, and worship was just a huge part of their African heritage that got them through their long workdays. Folk Spirituals were sung and often accompanied by hand claps and stomps reminiscent of the drums that they were robbed of when forcibly removed from their homeland. Percussion was a key part to African music and they refused to allow for it to be banned from the music they created. They also often danced and performed in circles while singing these spirituals.

For me Negro Spirituals are songs that I don’t even remember learning, I just know that when someone says sing “Wade in the Water” I can immediately recite all of the words. My initial thought was that these songs were simply passed down through oral tradition, However spirituals were actually written down, published, and distributed  by three Englishmen. They “bought a piano and a man who knew how to write and they penned the 100 Negro Songs of the United States.” (Slave Songbook) This allowed for people and groups like the Fisk Jubilee Choir to know the words and sing these spirituals allowing them to live long beyond slavery. Spirituals have influenced other genres of African American music such as the blues. The blues were known as “secular songs of sadness. They had the same idea of expressing circumstance, however  it was void of religion and that differentiated the blues from spirituals. In todays music as we are much further removed from slavery in historical terms there are still small remnants of the same sentiment in certain forms of hip-hop. As we see in some conscious  rap  people are penning their life circumstances and misfortunes as an impoverished people using their songs to express some hope for a day when they can have the money or the knowledge to leave their current circumstances and essentially be free from whatever holds them back thats beyond their control.