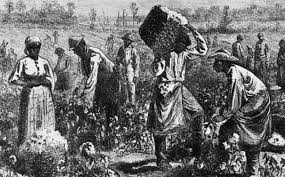 Negro Spirituals are composed by slaves. During slavery many slaves expressed their feelings and what they encountered through music. Creating songs not only to help them release their pain but also others. Collectively sharing the same hardships and battles they struggled with. Most slaves attended church where they were able to perform with their constructed spirituals. The movement and facial expressions showed how they felt. Often crying and getting very emotional. This allowed them to get through the struggle of slavery together and going to church allowed them to connect with God more.