The origin of African American Musical Theatre dates back to the 1830s with the very first minstrel shows taking place. By the 1890s Coon Songs and Black Face were popular parts of society and the music industry. In 1898 the Origin of the Cake Walk, was created and the very first African American all-black show to come to Broadway. It was classified as a musical comedy written by Bob Cole and Will Marion Cook. Cole was inspired by his belief that African Americans should prove their talents and compete with European performers while Cook believed African Americans should, “create their own style” separate from European genres. Cole worked with James Weldon Johnson and John Rosamond Johnson to create sophisticated African American Songs, with the goal of straying from music that perpetuated stereotypes against African Americans. Together, Cole and the Johnson brothers created various musicals such as The Shoo-Fly Regiment, In Newport, Humpty Dumpty, Sally in Our Alley, The Belle of Bridgeport, and The Red Moon. This all came to a halt when Bob Cole committed suicide in 1911. A few notable artists/performers were Bert Williams, George Walker, Ernest Hogan, Abbie Mitchell, Tim Moore, Edith Wilson, and Bill "Bojangles" Robinson 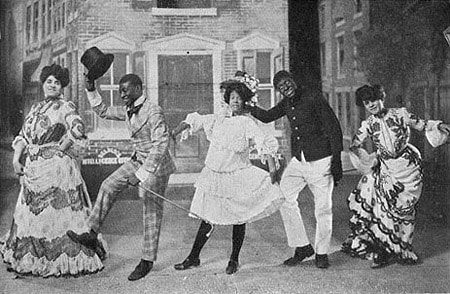