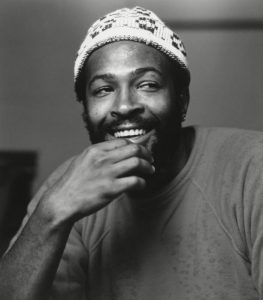 Marvin Pentz Gay Jr. was born on April 2nd, 1939 in Washington, DC to Marvin Gay Sr., a church minister, and domestic worker Alberta Gay. Marvin was the second oldest of four children, he had two sisters named Jeanne and Zeola and one brother, Frankie Gay. Gaye also had 2 half-siblings due to his father’s extramarital affair. Marvin Gaye started singing in his church at the young age of four. The church is where Gaye found his love for singing and was encouraged by others to pursue a career in singing after a performance at a talent show when Marvin was 11. Throughout his early life and into adulthood, Marvin Gaye had an extremely strained relationship with his father. Gaye described living with his father as being similar to “living with a king, a very peculiar, changeable, cruel and all powerful king” 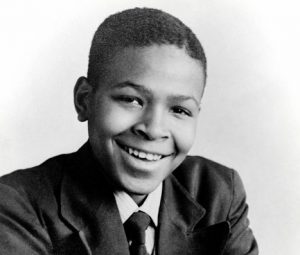 In 1956, Marvin Gaye dropped out of high school and enlisted in the US Airforce as a basic airman. During his time in the Airforce, Gaye was disappointed with having to perform menial tasks and was discharged shortly after faking a mental illness. After his return from the Airforce, Gaye and a friend formed a quartet group known as The Marquees. The quartet was very well known in the Washington D.C area and soon began working with Bo Diddley.

In 1960, The Marquees disbanded and Marvin Gaye relocated to Detroit. The same year, Gaye performed at Motown president Berry Gordy’s holiday party. Shortly after, Gaye signed with Motown Records. Before releasing his first single, Marvin changed his last name to ‘Gaye’ instead of ‘Gay’ because of rumors surrounding his sexuality. Gaye’s first single released in May 1961 was entitled “Let Your Conscience Be Your Guide”, his album, “The Soulful Moods of Marvin Gaye” was released a month after. Initial recordings failed commercially so Gaye opted to work as a drummer for Motown artists throughout the remainder of the year, getting paid $5 a week.

Gaye finally found success with his dance hit, “Hitch Hike” which reached the Top 40 and peaked at number 30 on the Hot 100. In 1964, Marvin Gaye and Mary Wells released a successful duet album titled “Together” which reached number 42 on the pop album charts. Gaye also released a successful single entitled “How Sweet It Is To Be Loved By You”. Around this time Gaye was also receiving TV exposure making appearances on shows like American Bandstand. In late 1968, Marvin Gaye released his first single to reach number 1 on the Billboard Hot 100. That single is the famous song “Heard It Through The Grapevine”

On May 21, 1971, Marvin Gaye released one of his most famous studio albums. “Whats Going On?” tells the story from the point of view of a Vietnam veteran returning to America after fighting in the war. This vet only sees poverty, injustices, and drug abuse upon his return. The inspiration for the single “Whats Going On?” came from Gaye’s friend Renaldo “Obie” Benson, a member of The Four Tops. Benson witnessed an act of police brutality and violence against anti-war protestors while on tour. Benson discussed his experience with Motown songwriter Al Cleveland. Eventually, Cleaveland and Benson offered Gaye the song. Both men released songwriter credits to Gaye who changed the melody of the song and revised the song to his liking. The album and single were extremely successful because of the consciousness incorporated into the music. In 1985, British music magazine NME voted “Whats Going On?” the best album of all time.

In 1972, Gaye began crossing over into making love songs. That same year Marvin Gaye recorded “Let’s Get It On” a song that would become one of the most revered love songs ever. The song became Gaye’s second number 1 Billboard hit, which cemented his crossover success. This crossover success also led to Gaye’s departure from Motown Records. After almost two decades with Motown, Marvin Gaye signed with Columbia Records in 1982 and began work on his second album, “Midnight Love”.

Marvin Gaye led a very controversial personal life. His life included several marriages, drug abuse, bouts of depression, and child abuse by his father. Marvin Gaye’s first marriage was with Anna Gordy, sister of Berry Gordy. This marriage was very tumultuous, with accusations of physical violence and infidelity. But, in 1966 the couple adopted a child they later named Marvin Gay III. Prior to the birth of the child, Anna Gordy faked the pregnancy to the public. In 1975, after three years of marriage, Anna Gordy filed for divorce from Marvin Gaye. After his marriage to Anna Gordy, Gaye met 17-year-old Janis Hunter. The couple welcomed a daughter, Nona Gay and later welcomed a son, Frankie Chrisitan. This was another disastrous marriage because of drug abuse and domestic violence. Despite divorcing one another, the couple continued an on and off relationship until Gaye’s subsequent death.

Marvin Gaye was also a heavy marijuana user but was introduced to cocaine in the early 1960s. His addiction to cocaine led to depression and paranoia. This then led to several suicide attempts, Gaye had attempted at least three times. Gaye was also a user of PCP, a drug found in his system at the time of his death. 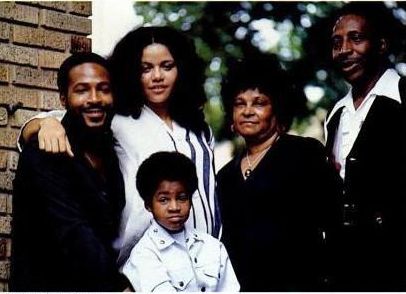 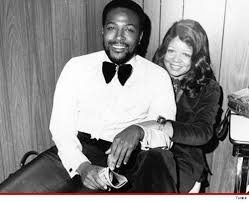 Marvin Gaye was fatally shot by his father on April 1st, 1984 at their home in Los Angelos, California. The two were involved in an altercation after Mavin Gaye intervened in an argument between his parents. On April 5th, 1984 Gaye was given a star-studded funeral at Forest Lawn Memorial Park. Smokey Robinson and Dick Gregory performed eulogies for the singer and Stevie Wonder performed “Lighting Up The Candles”

Three years after Marvin Gaye died he was inducted into the Rock and Roll Hall of Fame. A year after his death, DC mayor Berry Gordy declared April 2nd as “Marvin Gaye Jr. Memorial Scholarship Day” Since that day, non-profit organizations have worked to create events in DC to celebrate the life of Marvin Gaye. Many artists have covered the music of Marvin Gaye including; Brian McKnight, Aretha Franklin, Aaliyah, Diana Ross and Chico DeBarge.