Marian Anderson was born on February 27, 1897 in Philadelphia, Pennsylvania. Her family was extremely faith based and was well connected within the church.Marian herself was involved in the junior church choir where she really found her love for music. Her parents couldn’t afford to send her to high school but her community helped raise money in order for her to attend. When Anderson got out of high school she immediately applied to the Philadelphia Music Academy who denied her acceptance because she was black. Anderson didn’t give up and entered into a singing competition hosted by the New York Philharmonic. She won and was asked to perform in their concert with them. She became a fan favorite and eventually performed at Carnegie Hall and the White House.Because of her boldness, persistence, and candor, she will be remembered as one of the foremothers of the Negro Spiritual. 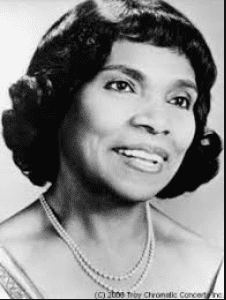 Marian Anderson was the first African American to ever perform at the White House. Although music was her passion, Anderson had a lot to do with civil rights. She was breaking barriers for African Americans and women left and right. Not only was she the first African American to perform in the White House, she also was asked to perform at the Lincoln memorial by Elenor Roosevelt after she was denied a performance at D.C’s Constitution Hall. Throughout her career and her lifetime, she received many prestigious awards and eventually made her way into the political scene. From performing for the president, being awarded the Presidential Metal of freedom, and singing at John F. Kennedy’s inauguration, Anderson was seen pushing racial barriers and challenging the narrative. Despite helping break racial stereotypes and boundaries, Anderson also created her own scholarship. The scholarship was run through a singing competition where the artist would be rewarded for their leadership and humanitarianism.Because of her humanitarianism and uniqueness, she will be recognized as one of the greats.