Mahalia Jackson was born Mahala Jackson on October 26, 1911. She was an American gospel singer with a career that spanned 40 years. Some of her inspiration was derived from Blues artist Bessie Smith, whom rose to fame in the Jazz era. Despite high racial segregation, Jackson achieved a high amount of commercial success which was evidenced by her millions in record sales and countless performances in front of integrated audiences around the world. 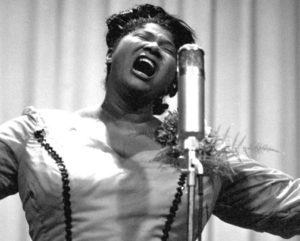 Jackson was raised in poverty in New Orleans and was also the granddaughter of slaves. Her musical foundation was in the church, and her upbringing contributed to her voice and unchanging dedication to her faith in God. Her legacy began when joining the Johnson Singers as an adolescent. Despite her circumstances, her desire to share her love of the Gospel taught a lesson of perseverance and hope. One of her greatest and most influential works include “Move On Up a Little Higher”. Her musical style captured a large audience of jazz fans, and she was able to spread her love of Gospel to a large secular audience. 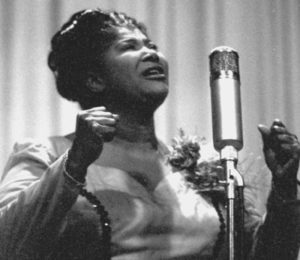 Jackson’s presence in popular culture, facilitated by her singing the national anthem at John F. Kennedy’s Inaugural Ball in 1961, and her regular appearances on television and radio, contributed to modern Gospel artists visibility in popular culture and among secular spaces. She expanded the reach of the Gospel beyond the church, and artists such as Yolanda Adams and Shirley Caesar are popular figures amongst Gospel music today. 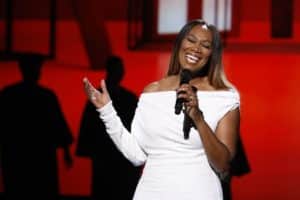 Jackson’s refusal to record secular music demonstrated her strong perspective and identity in an unwavering dedication to her artistry, and this strong sense of self inspires there countless musical artists today.